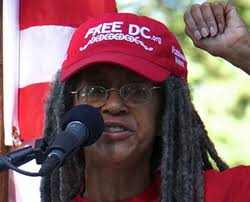 A proud native Washingtonian, Anise Jenkins is a two-time graduate of Howard University (BA in political science and Masters in Business Administration) and currently resides in the Shaw neighborhood in the District of Columbia.

Jenkins is the executive director of Stand Up! for Democracy in DC (Free DC).  Since its inception, Stand Up! / Free DC was the only grassroots organization in the District of Columbia focused primarily on the pursuit of statehood.  Recognizing that only through being admitted to the Union as a state, will DC residents be able to rise above the ongoing oppression by members of Congress.  This year, Stand Up!  is celebrating two decades of agitating, educating, organizing and mobilizing for DC statehood.

Anise is passionately committed to all forms of equal civil and human rights causes.  She was named one of the 50 most influential people in Washington, DC in 2013 by The Washington Informer, received a Trailblazer Award in 2005 from the National Congress of Black Women, is a 2002 recipient of a Human Rights Community Award from the United Nations Association of the National Capital Area and is a member of DC Area Phi Beta Kappa Association.