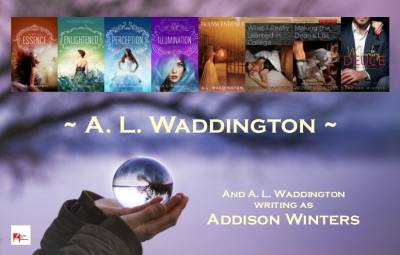 Angela. L. (aka) A.L. Waddington: Written five novels on paranormal mysticism with time travel and romance, with a splash of historical fiction.

Author of the EVE series (Essence, Enlightened, Perception, Illumination) and the Spirit Quest series (Transcendence). All are available on amazon, Barnes

& Noble, and all major book retailers.

The EVE and Spirit Quest series is ultimately a love story between Jocelyn Timmons and Jackson Chandler. It is freshly unique in that the main characters are relatable to a large audience in that their age group is late teens to early twenties. The narration of the story is told from eighteen-year-old Jocelyn Timmons viewpoint and the distinctively different lives that she leads on parallel planes when her soul travels nightly between the twenty-first century and the nineteenth century.

On a much grander scale of enlightenment, it offers an alternative explanation for déjà vu, the consequences of declining family dynamics, the rational of auditory and visual hallucinations as the classic symptoms of schizophrenia and hypothesizes the truth behind noted prophecies. The foundation is created in Essence, elaborated further in Enlightened and blossoms in Perception followed by a unique twist in the conclusion, Illumination. The series theories that an individual who has the inherited gift of EVE (Essence Voyager Era), possess the ability to live parallel lives on separate planes of existence. Throughout childhood and early adolescence, a barrier in their mind remains intact on the conscious level to prevent awareness of the other life from crossing each other. However, during late adolescence to early adulthood, the barrier between the two worlds begins to disintegrate causing the auditory and visual hallucinations of their other life to break into conscious awareness.

These symptoms, once recognized by a family member(s) who also have the gift, were throughout history, guided by those family member(s) to adjusting to the disintegration of the barrier and full conscious awareness of living dual existences. Unfortunately, with the decline in extended familial structure, family member(s) with the inherited gift are often no longer present when the symptoms appear and therefore the individual(s) are diagnosed with schizophrenia. 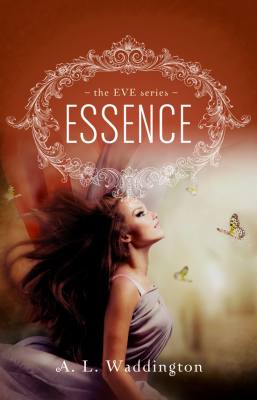