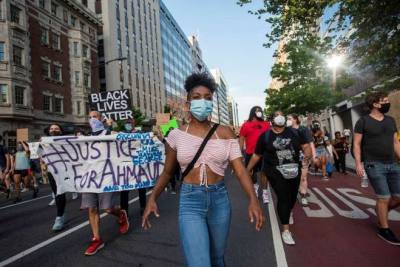 Aly Conyers is a 17-year-old student who attends a private high school in South Carolina. A three time all-American sprinter, Aly was supposed to spend this summer competing at track and field events. Instead, she is leading student protests to the White House and Rev. Martin Luther King Jr. monument.

Aly grew up surrounded by officers in uniform. Her father was in the Army, and her family has lived on military bases in Toronto, Seoul and Guantánamo Bay, Cuba. She has been raised with deep respect for the military, but also with an understanding of racial injustice in the world.

Her father encouraged her to read James Baldwin and Malcolm X from a young age. She vividly remembers her first protest: She was about 11, on vacation in Chicago, when her family decided to join a Black Lives Matter march. And now, Aly is leading marches in Washington, DC.

Aly created a group with her older brother Ace Conyers and a friend called Faces of the Future, hoping to get other teenagers more involved beyond the protests in DC.