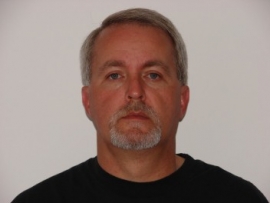 I'm a paranormal researcher who has taken my love of science and integrated it into the spiritual world.  My studies in quantum science have allowed me to provide a viable alternative to the explanation of paranormal activity while allowing a melding of the scientific and religious views associated with all things.

Joey Ward is the Founder and Director of the West Georgia Paranormal Research Society...a team of scientific paranormal researchers founded in December of 2005. Before that, Joey's own personal experiences led him into the study and research of the paranormal…where he has been an active investigator for over 10 years.

His area of concentration deals with the scientific explanation of paranormal activity as it relates to quantum science.  Joey’s personal approach to paranormal investigations focuses on the human aspect, which is the importance of managing the investigation process from the human (client) perspective as an integral part of the overall investigation.  Investigators who are successful at understanding, accepting, and working with the emotional, physical, psychological, and religious needs of the client will be far more effective at resolving paranormal issues.  Clients need to feel that they are just as important to the success of an investigation as any evidence obtained, and they need to be coached and empowered by the paranormal team to help them regain control of their lives.

Joey is currently active as a guest on Internet and FM paranormal radio worldwide, having appeared on over 100 radio shows across the United States, Canada, Australia and Europe.   His lecturing experience includes speaking appearances at conventions such as Ghostock, ParaNexus, OmegaCon, Ohio Paranormal Convention, ParaCon on the Lakeshore, and the Eastern Pennsylvania Paranormal Conference.  His other interests include writing, and he has written numerous articles and publications for various paranormal websites and organizations.  Joey’s no-nonsense approach to the paranormal field sometimes places him at odds with other researchers, but in a field where all research is theoretical, the process of exploring all the possibilities through networking and the media make him an interesting public figure.