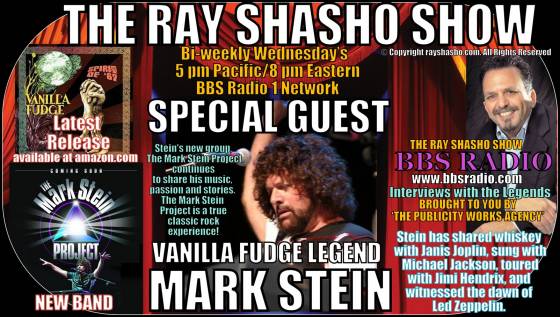 Mark Stein’s legacy spans over five decades, and he has influenced some of the most well-known rock bands and musicians. Mark Stein is known as the voice, keyboardist and music arranger of the classic rock band Vanilla Fudge. Mark first founded Vanilla Fudge in 1966 at the age of 18 with members Tim Bogert, Vinny Martell, and Carmine Appice.

Visit the official website for the Vanilla Fudge at … http://www.vanillafudge.com/main.htm

You can purchase Mark Stein’s latest book entitled ‘You Keep Me Hangin On’ at amazon.com

And also Spirit of '67 the critically-acclaimed album by Vanilla Fudge also available at amazon.com

The debut album: Vanilla Fudge was the first of its kind to reach the top 10 on Billboard charts without a hit single. “You Keep Me Hangin’ On” was released one year later and went to #1 on most radio playlists, both in America and all over the World! The psychedelic symphonic rock sound of the band was spearheaded by the Hammond organ & vocal style of Mark Stein. “The Fudge” have been heralded by critics as the doorway between pop music and Progressive Rock. Bands including Deep Purple, Yes, Uriah Heep and even Led Zeppelin have said that Vanilla Fudge had a profound influence on them.