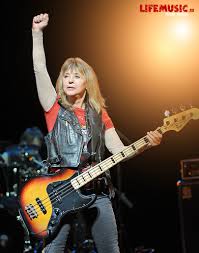 You can purchase Suzi Quatro’s novel Unzipped …Suzi tells her story of life behind the scenes and in the thick of it, working, partying and rocking with other legendary figures such as Noddy Holder, Alice Cooper and Iggy Pop. And Through My Eyes 2nd Edition-Poetry and Reminiscences … available now at amazon.com

QSP … featuring Suzi Quatro, Andy Scott (guitar Sweet), and Don Powell (drums Slade) can be purchase at amazon.com Also purchase Suzi Quatro’s CD The Girl From Detroit City A four CD set, the first ever career-spanning anthology from the Queen of Rock N Roll as she celebrates 50 years in the music industry also available at amazon.com

Visit Suzy Quatro’s official website at suziquatro(dot)com for all the latest news and concert dates.

Very special thanks to Doug & Don Newsom with BBS Radio for making it all happen every show!  Join me bi-weekly Monday’s at 3pm pacific/6pm Eastern on The Ray Shasho Show. If you have comments or suggestions or would like to be a guest on The Ray Shasho Show call 941-877-1552 or email us at ray@publicityworksagency.com. 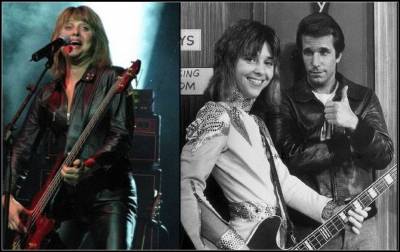 AFTER 53 YEARS SUZI QUATRO ROCKS HARDER THAN EVER!

THE ROCK AND ROLL HEROINE TO HIS SHOW

SUZI QUATRO, fourth of five children, born under the sign of Gemini, on June 3rd, 1950, in Detroit Michigan.She was raised in a musical family, including 3 sisters and one brother, who all played various instruments. Suzi herself made her debut on stage playing bongo’s in her father’s jazz band, "The Art Quatro Trio".

From an early age she studied classical piano and percussion, then aged 14, began an all girl band with elder sister Patti, called "The Pleasure Seekers". Suzi was ‘told’ she would be playing bass guitar, which was as tall as her! she a quickly became the lead singer and front person, this band toured for 7 years, very successfully, releasing a few singles along the way ,then changed their name to cradle in 1969.It was in this band, a couple of years later, that Mickie Most; (producer) came to a concert, and offered Suzi a solo contract. She flew to England in 1971 to begin her journey to fame.

Soon after Suzi began working with  now legendary songwriters Chinn and Chapman (Mike Chapman also produced) , which resulted the huge hit, “Can The Can”, which went to number one in May 1973, and went on to sell two and a half million copies worldwide. Between 1973 and 1980, Suzi Quatro featured in the British charts for no less than 101 weeks, and has sold to date over 55 million records, and still counting. Her hits include “48 Crash”, “Too Big”, “Devil Gate Drive”, “Daytona Demon”, “The Wild One”, “She’s in Love With You”, “Mama’s Boy”, “If You Can’t Give Me Love”, “Rock Hard”,  and a million seller in the USA., ‘Stumblin In’ a duet with Chris Norman

From 77-79 Suzi spread her wings and landed a part on the worldwide hit TV. Series ‘Happy Days’, playing Leather Tuscadero opposite Henry Winkler and Ron Howard.  She continued to act in other shows including, Minder, Dempsey and Makepeace, and more up to date, Absolutely Fabulous and Midsummer Murders. In 1986 Suzi made her West End debut playing the leading role of Annie Oakley in Irving Berlin’s ‘Annie Get Your Gun’ for which she received great critical acclaim. 1988 Suzi spread her wings again, and hosted her own talk show called ‘Gas Street’ which ran for a year.

1989 Suzi was one of the first rock and roll acts to go to Russia, where she performed for over half a million people in just six weeks. 1991, She was triumphant again, realizing a lifelong ambition by writing the music and lyrics, along with Shirlie Roden, and starring in ‘Talullah Bankhead’  it ran for its full season of 5 weeks, and Suzi received amazing critics, even though they were not officially allowed into review the show.

Jan, 1999 started Suzi’s radio career with BBC radio 2, which is ongoing today.  Suzi has done her own weekly programs, and many special documentaries including Elvis Presley, Otis Redding, Janis Joplin, Jim Morrison, Patsy Cline, and a recent special on her home town of Detroit. Suzi has met, interviewed or played on stage with most of her hero’s.   Suzi is a very popular DJ. Even being nominated for music broadcaster of the year at the Sony radio awards in 2006 1999 also saw Suzi honored in ‘This Is Your Life’, complete with famous red book. They caught her on her 56 date UK tour, onstage at the Palladium... completely off guard; there were a few expletives that had to be edited out!!

In 2006 Suzi released the autobiographical album, “Back to the Drive”… which has become the fans favorite worldwide. Suzi also made an appearance alongside Charles Dance in the theatre, in a play called “Exonerated at this time”. Unzipped, Suzi’s Autobiography was released in 2007 and has done extremely well worldwide... getting to number 2 in the Australian charts where she continues to tour.  The next tour in 2013 will be her 29th down under!!! Current release, produced by long time collaborator Mike Chapman, ‘In the Spotlight’ which is now also available in Limited Edition with an extra CD of unreleased Suzi compositions called ‘In the Dark’, and an enhanced CD with a video of ‘Strict Machine’ and the now legendary Suzi tribute to her absolute hero, Elvis Presley, ‘Singing With Angel’s, which she recorded in Nashville with James Burton on guitar, and Elvis’s original backing vocal group, the Jordinaries.

Recently Quatro performed at the third “Remember the Child” Dick Wagner memorial fund concert at the MotorCity Sound Board. Proceeds went to the Children’s Miracle Network Hospitals, which include Beaumont Children’s Hospital and Flint’s Hurley Children’s Hospital, providing music therapy and music instruction to hospitalized children. Wagner’s old friend Mark Farner, who rocketed to fame with Flint’s Grand Funk Railroad, headlined the roster of talent, along with Suzi Quatro and the Pleasure Seekers.

Suzi also recently finished a very successful 19 date, thirty second tour in Australia and even sold out the Opera House.

Suzi celebrates over 53 years of performing … and eloquently states … "I WILL RETIRE WHEN I GO ONSTAGE, SHAKE MY ASS, AND THERE IS SILENCE"

You can purchase Suzi Quatro’s novel Unzipped …Suzi tells her story of life behind the scenes and in the thick of it, working, partying and rocking with other legendary figures such as Noddy Holder, Alice Cooper and Iggy Pop.

And Through My Eyes -Poetry and Reminisces … available now at amazon.com

Also purchase Suzi Quatro’s latest CD The Girl From Detroit City A four CD set, the first ever career-spanning anthology from the Queen of Rock N Roll as she celebrates 50 years in the music industry. 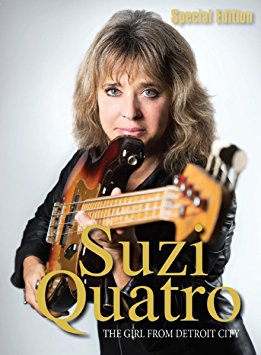