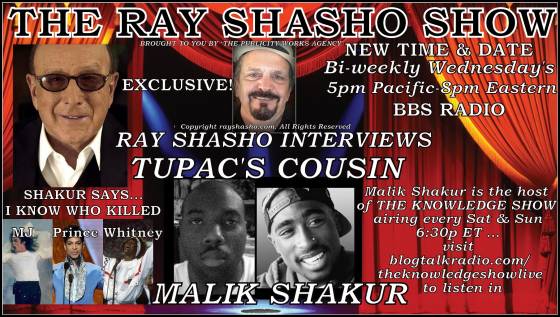 Very special thanks to Doug & Don Newsom with BBS Radio for making it all happen every show!  Join me at our new time and day slot bi-weekly Wednesday's at 5pm pacific/8pm eastern on The Ray Shasho Show. If you have comments or suggestions or would like to be a guest on The Ray Shasho Show call 941-877-1552 or email us at ray@publicityworksagency.com 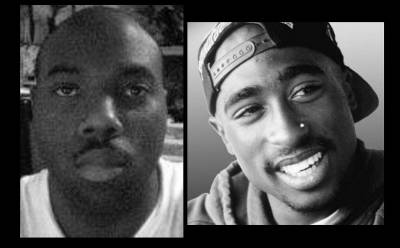 AND KNOWS WHO MURDERED

Malik Shakur is the host of THE KNOWLEDGE SHOW a very Unique, Controversial, Educational, and Entertaining Talk Show that broadcasts live. Malik Shakur is the cousin of the late Tupac Shakur and has earned several trophies, awards, and accolades for the show and the live conversations on the show. Malik Shakur asks the real questions and gets the real answers to keep it 100 and deliver the truth, but some can't handle the truth. If you are one of the few that can, then this is the show for you. We cover conspiracy theories, current events, controversial discussions and topics, and talk about subjects that no one else is talking about, but the community needs to know about by any means necessary.

Tupac Shakur was a sensitive, precociously talented yet troubled soul who came to embrace the 1990s gangsta-rap aesthetic and paid the ultimate price — he was gunned down in Las Vegas on September 7, 1996 and died six days later. His murder has never been solved. He began his music career as a rebel with a cause — to articulate the travails and injustices endured by many African-Americans, often from a male point of view. His skill in doing so made him a spokesperson not just for his own generation, but for subsequent ones who continue to face the same struggle for equality. In death he became an icon symbolizing noble struggle, though in life his biggest battle was sometimes with himself. As fate drove him towards the nihilism of gangsta rap, and into the arms of the controversial Death Row Records impresario Suge Knight, the boundaries between Shakur's art and his life became increasingly blurred — with tragic consequences. Hip-hop legend Tupac Shakur was embroiled in a feud between East Coast and West Coast rappers and was murdered in a drive-by shooting in 1996, leaving behind an influential musical legacy at the age of 25. Tupac sold over 75 million records worldwide. 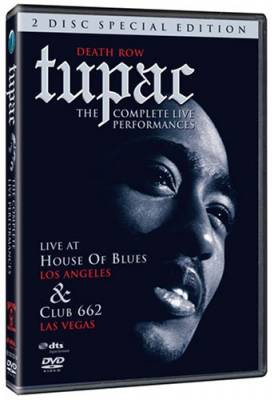