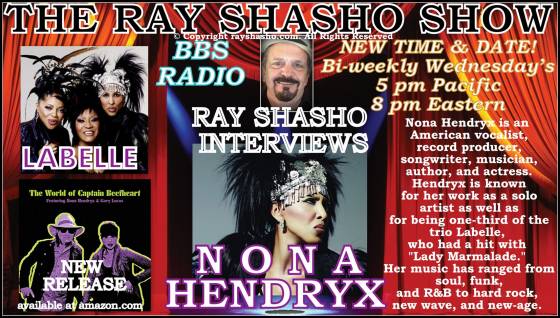 Very special thanks to Howard Wuelfing of Howlin' Wuelf Media for arranging this interview with Nona Hendryx and to Doug & Don Newsom with BBS Radio for making it all happen every show!  Join me bi-weekly at my new time and date Wednesday's at 5 pm pacific/8 pm Eastern on The Ray Shasho Show. If you have comments or suggestions or would like to be a guest on The Ray Shasho Show call 941-877-1552 or email us at ray@publicityworksagency.com. 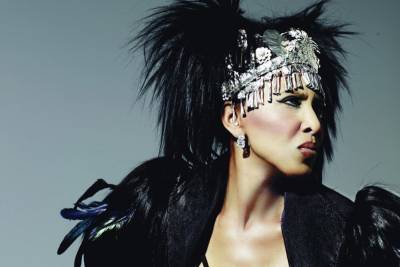 THE WORLD OF CAPTAIN BEEFHEART

Nona Hendryx (born October 9, 1944), is an American vocalist, record producer, songwriter, musician, author, and actress. Hendryx is known for her work as a solo artist as well as for being one-third of the trio Labelle, who had a hit with "Lady Marmalade." Her music has ranged from soul, funk, and R&B to hard rock, new wave, and new-age. Her family's last name was originally spelled with an "i"; she is a cousin of American musician Jimi Hendrix.

Hendryx was born in Trenton, New Jersey in 1944 where she met fellow New Jersey native Sarah Dash and later met Philadelphia-born singer Patricia Holte (Patti LaBelle). After a short-lived tenure as a member of the Del-Capris, Hendryx and Dash formed a singing group with Holte (once the lead singer of a girl group in Philadelphia called The Ordettes). In 1961, Cindy Birdsong, from Camden, New Jersey, became the fourth member of the group, who became the 'Bluebelles' and signed their first deal with Newtown Records.

After the release of their debut hit, 1962's "I Sold My Heart to the Junkman", their name altered again to Patti LaBelle and the Bluebelles. Hendryx's husky alto differed from Dash's sharp soprano, LaBelle's mezzo-soprano and Birdsong's second soprano. During this tenure, the group became known for their emotional live performances and their renditions of classic standards such as "You'll Never Walk Alone", "Over The Rainbow"and "Danny Boy". The group often found themselves competing against girl groups such as The Chantels, Shirelles and The Supremes. In 1967, Hendryx, LaBelle and Dash were shocked to discover that Birdsong had secretly joined the Supremes after Florence Ballard was ousted from the group by Motown. Different members of the group were in touch with Birdsong over the years. Birdsong's relationships with the Bluebelles healed and they came together again for the ceremony when the group won an R&B Foundation Lifetime Achievement Award in 1999.

Back to the current release in question: Gary Lucas and Hendryx starred in a symphonic Captain Beefheart Tribute with Amsterdam's famed 65-piece Metropole Orchestra at the Paradiso a few years ago.  The album was co-produced by Gary and Jesse Krakowand recorded at EastSide Sound in NYC. The World of Captain Beefheart is being released by Knitting Factory Records on November 10th.

The World of Captain Beefheart strikes a fine balance between the more bluesy and groove-accessible songs in the good Captain's oeuvre and the more extreme, darker and weirder side.

Nona Hendryx is a longtime fierce admirer of Don Van Vliet's music, and possesses the huge voice and the commanding stage presence necessary to do full justice to repertoire that originally featured Beefheart's unforgettable multi-octave voice. Although she's best known as a funk/soul great thanks to her long tenure with international hitmakers Labelle (as well as the group's antecedent, Patti Labelle and the Bluebelles) as well as her own excellent R&B-rooted solo outings, she is no stranger to experimental rock territory, having been featured as guest vocalist with cutting-edge ensembles including Talking Heads, Bill Laswell's Material, and Jerry Harrison's Casual Gods.

To this day, Don Van Vliet remains a cult hero, relatively unknown in mainstream circles. If any album is able to change that, it's The World of Captain Beefheart.

Watch for the release of The World of Captain Beefheart featuring Nona Hendryx and Gary Lucas on November 10th from Knitting Factory Records. 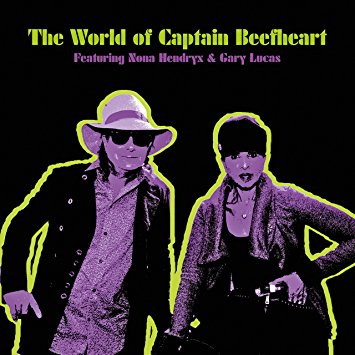 Nona Hendryx is an American vocalist, record producer, songwriter, musician, author, and actress. Hendryx is known for her work as a solo artist as well as for being one-third of the trio Labelle, who had a hit with "Lady Marmalade." Her music has ranged from soul, funk, and R&B to hard rock, new wave, and new-age. Her family's last name was originally spelled with an "i"; she is a cousin of American musician Jimi Hendrix