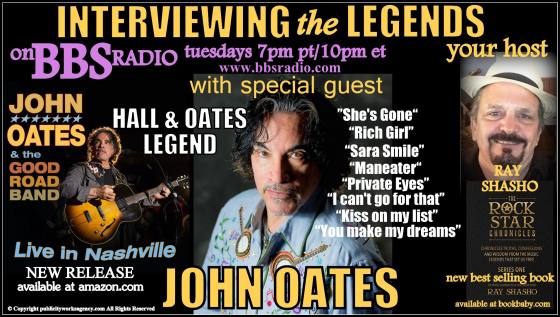 John Oates met Daryl Hall while attending Temple University in Philadelphia, PA. The two began collaborating and playing music together, marking the beginning of their historic partnership. Since their formation in the early 70s, Daryl Hall & John Oates have gone on to record 21 albums, which have sold over 80 million units, making them the most successful duo in rock history. They have scored 10 number one records, over 20 Top 40 hits, and have toured the world for decades.

John went on the road with the “ Good Road Band “  the very same musicians that played on the album and developed a critically acclaimed show which he captured during a live performance at the legendary Station Inn in Nashville in June of 2020. The recording, to be released in September 2020 displays the amazing talent of these world class players and captures the energy of not only the music of “Arkansas” but introduces new original songs as well. “This is the culmination of two years of touring and you can hear the players interacting and working together in a way that is astounding. “

Very special thanks to Tom Burger of Wolfson Entertainment Inc. for arranging this interview with John Oates and the dynamic duo of Doug & Don Newsom of BBS Radio for making the magic happen for each and every broadcast of Interviewing the Legends. If you have comments or suggestions for the show contact me at interviewingthelegends@gmail.com and please subscribe to my You Tube channel interviewing the legends with Ray Shasho for the very latest interviews …