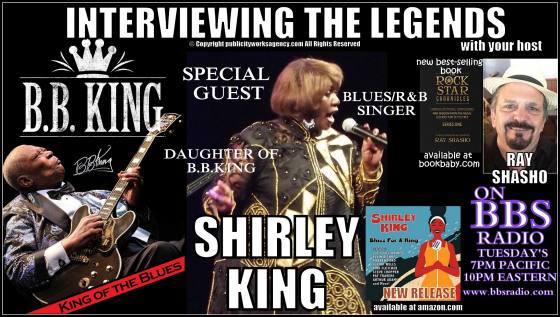 Born and raised in West Memphis, Arkansas, Shirley began singing in the church choir at age nine. When she was thirteen, she met another music legend – Etta James.

Young Shirley was so impressed by Etta’s performance that she made Etta her musical role model. Ruth Brown and the late Mahalia Jackson also greatly influenced the fledge-ling singer.

BLUES FOR A KING

You can also purchase

B. B. King’s Daughter Fights to Preserve Her Father’s Legacy Paperback – April 29, 2017 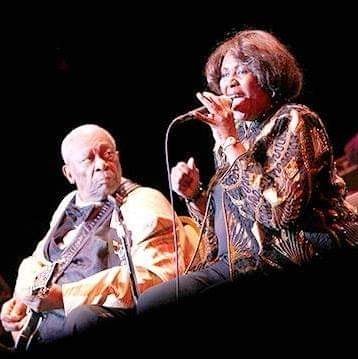 Born and raised in West Memphis, Arkansas, Shirley began singing in the church choir at age nine. When she was thirteen, she met another music legend – Etta James.

Young Shirley was so impressed by Etta’s performance that she made Etta her musical role model. Ruth Brown and the late Mahalia Jackson also greatly influenced the fledgling singer.
Shirley says, “I grew up around the stage watching my dad become famous, but I never imagined I’d become a blues singer too.”

Ms. King came late to the blues, first trying it on in 1990. Within six months, she was a regular performer at famed Chicago blues club Kingston Mines. Two years later she released her first CD, “Jump Through My Keyhole.”

In 1999, Shirley released her highly acclaimed blues album, “Daughter of the Blues,” which featured her soulful, bluesy versions of classics like Wang Dang Doodle, Sweet Home Chicago, Every Day I Have the Blues and, fittingly, The Thrill is Gone.

Once her father caught her act he lent his full support to Shirley’s efforts at carving out her own career.  She admits that having a legendary father helped open some doors for her, but it was her talent, charisma and high-energy stage presence, along with her big, beautiful singing voice, that put her on the musical map.

From traditional blues to gospel to funky R&B to smooth soul, Shirley defies genre and her singing and stage antics never fails to excite her growing number of fans worldwide.

Shirley also believes in giving back. She has also worked with kids as an artist-in-residence with the highly acclaimed Urban Gateways Arts in the Schools Program at Chicago Public Schools and continues to expose school children to the history blues has played in American culture.

Shirley also published her memoirs in 2017 entitled Love is King, which is dedicated to her father and goes into detail about her life with her dad, to whom she was very close.

Blues Hall of Fame guitarist Joe Louis Walker, who guests on two tracks on the new album, said, “I’ve had the honor of performing on two B.B. King albums.  Now I have the distinct honor and pleasure of playing on his daughter’s album, Shirley King, who is also my dear friend.  Keep the thrill goin’ on Shirley….”

With her powerful voice and outgoing personality, Shirley always rocks the house whether it’s on an international stage, a festival or a nightclub.

She’s ready to bust out bigger than ever on her own in a way that would make her daddy proud.  Make sure to come along for the ride.

BLUES FOR A KING

For more information about Shirley King 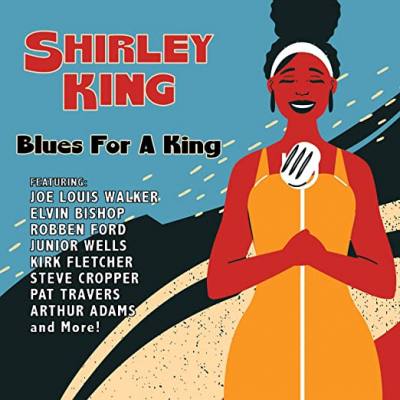 Very special thanks to John Lappen Enterprises for arranging this interview with Shirley King and the dynamic duo of Doug & Don Newsom of BBS Radio for making the magic happen for each and every broadcast of Interviewing the Legends. If you have comments or suggestions for the show contact me at interviewingthelegends@gmail.com and please subscribe to my You Tube channel interviewing the legends with Ray Shasho for the very latest interviews …

The Rock Star Chronicles, by Ray Shasho, is a splendid book written by a music enthusiast who has poured their heart and soul into it. It’s a story of a boy who loved rock music, and his obsessive passion of it earned himself the name Rock Raymond. He went to school but instead was schooled in all matters of music while his peers were buried chin-deep in coursework. He then became a radio DJ and has now compiled a book on all interviews he held with Rock gods who raided the airwaves back in the 70s and 80s. It’s a compilation of interviews with outstanding vocalists, legendary guitarists and crazy drummers in the rock music scene. Each interview gives a reader an in-depth view into their personal lives and the philosophies that guide their lives which all serve to humanize these great icons. For readers who are old enough to call themselves baby boomers this book will bring old memories back to life. Millennials, on the other hand, may think of this book as a literal work of the Carpool Karaoke show.

The Rock Star Chronicles is a book I didn’t know I was waiting for. To come across a book that will talk me into trying something new. One brave enough to incite me to venture into new frontiers. This book made me a believer- I am now a bona fide Rock and Roll music fan.

Ray Shasho masterfully gets the interviewees talking. He smartly coaxes answers from them with crafty questions designed to get a story rolling out of them. The artists talk about diverse issues ranging from music, politics, and their social engagements. Having been on the music seen all his life, Ray Shasho knows the buttons to press, how to get them comfortable about talking about their lives.

The book’s cover is befitting of its subject matter with the leather look offering a royal background to the golden letter print. It speaks to how high a level rock music holds in the pecking order- arguably, modern music as we know it has originated from blues and rock music.  The second noteworthy thing is the use of high definition pictures to reference the musician being interviewed in every sub-chapter. This ensures that the book is for both original rock and roll lovers and aspiring new ones. Together is makes for a refreshing and consistently enjoyable read.

I recommend this book to rock music enthusiasts, aspiring musicians wondering what it takes and all readers curious to learn new things by going back in time.