My guest was Michael Horn the authorised American Media Representative for the Billy Meier UFO contact. Billy has taken over 1000 photographs of spaceships from different origins, paticularly those from the Pleiades, and has also had contact with Pleiadians themselves. Billy received messages from them, and these feature in "Messages from the Pleiades" Vol. 1&2 and Vol. 3&4. he also has other books including "An Interview with a UFO Contactee". Billy can genuinely claim to have some of the most perfect and clear Spacecraft photographs ever taken. Michael has just given a first screening in London of a new film about Billy Meier "The Silent Revolution of Truth" which is available as a DVD. 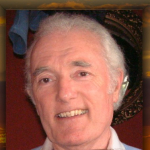 I am married with two sons Alan and Colin. My wife Cathy supports me but prefers to keep out of the way. I started out life with very much orthodox views regularly attending a Protestant Church. I was never totally at home with their teachings, and as I got older completely turned my back on them. Having made a clean start I went my own way about finding the truth. I searched for it by going back to ancient times and became fascinated by Ancient Egypt. It was in the early 70's that I found Edgar Cayce's readings about Egypt and Atlantis, and this set me off trying to find out more about those periods. This lead me to a society called The Atlanteans and I immediately felt at home with their teachings from Helio Arcanophus, which means "High Priest of the Sun" as he was called in Atlantean times. I soon started my own Branch, and also formed a section in support of The Universal Network under Tuella, who channelled Ashtar. I also formed Galacticom Europa to distribute tapes and messages through Carole Hall, also from Ashtar. At the same time I started my own magazine called The Messenger.

I have had a few UFO sightings, and the most convincing one was in the early 80's. I was driving home alone after attending a private meeting to develop mind to mind contact with ET's. As I was driving down a hill I suddenly noticed a large circular silver/blue craft which had come from behind me and appeared in my windscreen. It was going very slow and it appeared to pulsate, leaving a partial image behind it. It was in sight for only about 10 seconds and disappeared over some rooftops.

I really came into my own after I retired in December 1999. I upgraded my computer and joined the Internet. In December 2003 I found that the treeofthegoldenlight invited E.T. articles to be placed on their web. I was accepted and now have a series of them in place. One day, Nancy Tate of the daily Wake Up Calls told me St. Germain wanted a word with me, and I was asked to sit at my computer each morning to take messages. This was in March 2004 and ever since I have received them every day from Monday to Saturday. Now I am taking another step in response to Donald Newsom's kind offer to allow me a regular program on his BBS Radio.