A picture is worth a thousand words…. Chuck and Julie have the video of what really happened with the mounted Border Patrol agents.

Plus John Lott Jr. on his latest column revealing the truth on how guns save lives.

And of course the Arizona audit results.

A picture is worth a thousand words…. Chuck and Julie have the video of what really happened with the mounted Border Patrol agents.

Plus John Lott Jr. on his latest column revealing the truth on how guns save lives.

And of course the Arizona audit results 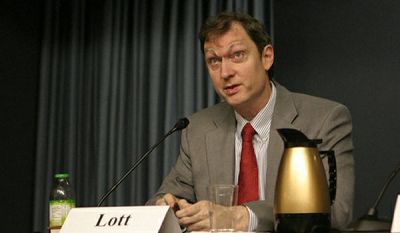 John R. Lott Jr. is an American economist with an extensive background and history in politics, economics and gun rights advocacy. His academic and professional career is lengthy and diverse, having worked at and written for a variety of educational institutions and publications across America. He has also authored several works on gun rights and economics covering the free-market theory.

John Lott was born in 1958 in Detroit, Michigan. His academic journey began at UCLA, where he received his Bachelors in Economics in 1980. He went on to obtain both his Masters and Ph.D. in the same field at UCLA in 1982 and 1984, respectively. From there, Lott went on to to work as an Economist and in the law field profession at the University of Maryland, Yale Law School, the University of Stanford, Texas A&M University, UCLA, Rice University and Wharton Business School. Outside of employment at these universities, Lott also worked as Chief Economist at the United States Sentencing Commission, a resident scholar at the American Enterprise Institute and a senior researcher at the University of Maryland Foundation.

Lott is most famous for his view on gun rights, including the right of gun ownership in The United States and the ability to carry a gun. He has received both praise and criticism for his views, making him a controversial economic and political figure. His most well-known works on gun rights include More Guns, Less Crime and The Bias Against Guns. In these works, Lott argues that the more guns Americans have, the less likely there will be crime. He stands strongly against strict gun restrictions and gun laws, claiming that only gun use used for violence is broadcast on the media, instead of guns used as defense. He believes this misrepresentation of gun use is unfair and a key factor in misinformation in proper gun use in America.

His arguments have landed him several roles as a political commentator. His op-ed pieces have been featured in a number of publications, including The New York Times, The Wall Street Journal, the Chicago Tribune, the Los Angeles Times and USA Today. He also contributed regularly to Fox News from 2008-2009, where he published works on such subjects as then-President Barrack Obama’s political and financial decisions, race problems in America, women’s rights, unemployment and the Great Recession of 2008, among other topics.

As of 2020, Lott continues to write political and economic pieces on his online blog. His blog posts continue to cover a range of political and economic topics, including the 2020 Presidential Election, racial protests in America, the Coronavirus pandemic and the change of gun laws in various states. Lott’s posts can also be found on the Crime Prevention Research Center website, which was founded and owned by Lott for several years. Lott hopes that more Americans can understand the use of guns in anti-violence prevention in the new decade.