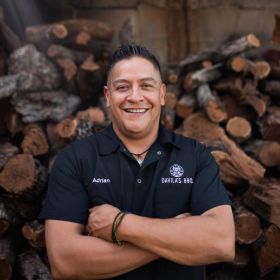 Specializing in authentic Texas barbecue with a uniquely Latin American twist, Davila's BBQ in Seguin’s mesquite-smoked beef brisket, pork ribs, lamb ribs, and more highlights and shares the flavors as well as the stories of the Tejano community. Adrian Davila, award-winning third-generation pitmaster, continues to honor his family’s legacy and the traditions of Mexican-American cooking, all while exploring his own unique identity.

Adrian is a third-generation pitmaster, barbecue chef and restaurateur at his family’s acclaimed Davila’s BBQ in Seguin, Texas. He continues to honor his family’s legacy and the traditions of Mexican-American cooking, all while exploring his own unique identity. His grandfather, Raul Davila, opened Davila’s in 1959, and passed the secrets of his smoked barbecue to Adrian’s father, Edward. The family is proud of their commitment to creating the best barbecue in Texas.

Adrian still practices those skills today, and has since created his own unique recipes for the restaurant as well as its extensive catering business. He has also taken some of those creations on the road to special events across the state in the restaurant’s food truck. He continues to expand his culinary knowledge and skills through research and travel, most recently throughout Europe, with a special stop in the city from which his family once hailed, Avila, Spain. In 2018, he finished his first book, Cowboy Barbecue, working alongside noted culinary author Anne Volkwein, and has promoted the book across the country. Adrian has been featured on Cooking Channel’s Man Fire Food, as a judge on the Travel Channel’s American Grilled, as a contestant (and first-place winner) on the Food Network’s BBQ Blitz “Texas Takedown,” as a guest chef on the Food Network’s The Kitchen, as a judge on the Food Network’s BBQ Kids Champion, and on Tastemade. He has recently completed filming in Food Network’s newest show, “BBQ Beatdown,” soon to air.