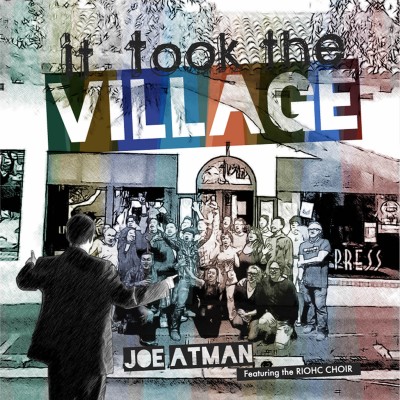 Joe Atman has strong influences that are soulful and his debut CD, It Took The Village, Atman opens up with a solemn track, and one of the main singles on the album, "Arrest Me," and his strong and unique vocals with impeccable songwriting chops, flows perfectly throughout the entire CD, and through the final song, "Story Of The Llama V (Outro)" that completes the full length fifteen (15) song disc. The songs are all top notch with great arrangements while having crafted very accessible lyrics and words on all of (Joe) Atman's songs, let alone the main singles (Moon-Sabled Nights, Cats, Sunshine When It Rains (along with Arrest Me)) being to worked to radio starting this week. Hi piano playing is reminiscent of Ben Folds (Ben Folds Five).

(Joe) Atman brings more great Adult Contemporary infused pop songs with a touch of folk music, AAA and choral music all somehow how wrapped up into many of the great songs on the “It Took The Village” CD. The album also showcases what is not only the great production (Produced by Jon Crawford) on the record, it also very much showcases (Joe) Atman's skills as a natural songwriter. It is also felt that this album is close to the heart of the songwriter and the story told through the fifteen (15) song full length CD that is set to hit stores worldwide, on December 11th. It Took The Village is about some of the more natural things that everyone can relate to like being love, wanting peace, expressing one self and being free and easy in general.

Atman's piano work is impeccable on this full length CD. On quirky tunes like “Johnny Johnny Red Bird” shows off those piano playing skills, but every song has that as the fundamental base. Coupled with the harmonies “featuring the RIOHC Choir,” the unique styled Atman voice, and, the music as a whole, this is one of the better albums in this format, in a long time, let alone this year. Atman is also one of the most acclaimed new artists that are one album deep, that have hit the music scene in many years.

His debut release, It Took The Village (Street Day: 12/11/2012) is great music for any time of the day, but is listened to mostly by fans today on those relaxing days and late nights sitting by the fire. His abilities as a songwriter has become more pronounced most likely because of the great production that is bigger than life sounding. Rounding off this CD are songs like "Another Day" and "Know The Wind" are also accessible lyrics wise with great arrangements. The debut album shows off production mixed with Atman's great songwriting making the performance on the It Took The Village a must listen