Hosts Ash Riot and Cheryl Catherine Smith are highly intuitive solo musicians who have come together to form the Hollow-Gram band.

They offer a unique radio show where they share their music, their sharp wit, and their visions for This planet.

"Inspiration is why music exists, this is the key to the heart." Ash Riot 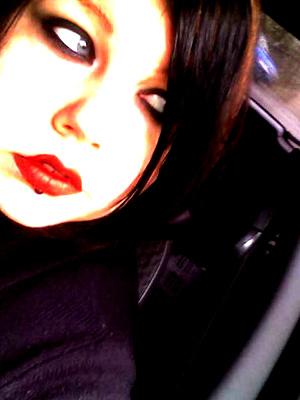 Musician (including bands Hollow-Gram and Ash Riot), as well as a music teacher and founder of Rockstar Guitar & Musical Developments. A music school operated out of Surrey BC, who's slogan "Experience the real school of Rock" rings true daily. Students of all ages and abilities can learn guitar, bass, drums, songwriting, collaboration, demo recording, vocals, etc; in a relaxed environment and at their own pace. This is not your run of the mill lesson atmosphere, this is a passionate and personalized approach to music that goes well above scales and chord charts.

Inspiration is why music exists, this is the key to the heart. With hundreds of students over the past ten years, this is well on its way to helping people all over the Vancouver area connect with their love of music. 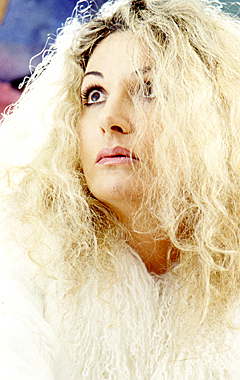 As far back as I can recall, I have always thought of myself as an artist.  I remember being in 5th grade when I began to really embrace my creativity.  I wrote and recorded my first song with a used tape recorder that my mom had found for me at a garage sale and developed a serious passion for music, listening to my then favorite Vancouver radio station 14 CFUN when I wasn’t around a turntable spinning my favorite records.  I played the recorder, picked up the guitar, and danced, danced, danced and sang along to songs like “Blinded by the Light” and “Seasons in the Sun”.  My favorite playtime thing to do with my girlfriends after school was to design and draw our very own fashion magazines.  We wrote the articles, designed zany outfits and made up some pretty hilarious ads.  I think Mad Magazine was a big inspiration for me around that time, as well as my mother’s Cosmopolitan magazines, (which haven’t changed a bit since then!)

AS A SINGER & PERFORMER

As a singer and performer I have had the privilege of working with a variety of famous, not famous and infamous artists both in the studio and on stages around the world. Throughout my school years I participated in a range of music and acting programs.  As a teenager I became a more serious musician working as a lead singer with several bands based in Vancouver’s very musically known Broadway Tabernacle, where the then manager of Little Mountain Sound Mr. Bob Brooks was an influence...(that’s right, I started out in the ‘Christian Rock’ scene!)  Although my personal beliefs have radically changed since that time, I am still grateful for the teen thrill of singing before an appreciative crowd of 10,000 people at Vancouver’s PNE Main Stage – this experience got me hooked on the high that only live performances can bring.  I remember receiving many accolades for sounding like a cross between Blondie and Pat Benatar, both of whom were very popular at the time.  For many years I went down the artistic road of excess, as I was seeking the palace of wisdom.  This led me to a multitude of wild experiences to include being in the studio with the London Choir Boys and many others I choose not to divulge until I am inspired to write my memoirs.  I eventually found said palace, grateful for the progressively darker experiences of mind-altering indulgences as they gave me much fodder for writing lyrics.  Most recently I have been a back-up vocalist for the well-known Canadian super group BTO and other lesser-known Canadian and European acts.  I have successfully fronted several Rock and Country bands, and worked extensively as a studio session singer with a variety of Canadian solo artists.  I am currently devoted to my own career as a solo artist, with the help of my very talented and accomplished partner, Kevin Swain.  Some 2005 highlights include visiting the UK and my most favorite city in the world – Paris, where we promoted our CD “All Dark Places”.  While in Europe we opened for the Maritime’s own ‘The Heavy Blinkers’ at The Brickyard in Carlisle, members of ‘Rubber Soul’ helped us by playing with us for our show at The Cavern in Liverpool, we jammed with the entertaining musicians of ‘Roadhouse’ band in London, performed at Raffles in Chelsea, New York’s Joey John played our single on his own Paris radio show, we made a weekend jaunt to Edinburgh to play alongside a most talented and hilarious musician and Scotsman, named Michael – in other words, we had tons of fun.

I have been in the entertainment industry throughout the majority of my life.  I’ve had the privilege of having a variety of media-related experiences other than that of being a singer/songwriter, to include:  a radio broadcaster, where I wrote and recorded a daily ‘Leisure News’ show for CISL radio, Vancouver; an international print and runway Model for John Casablancas and June Dally Watkins Agencies; and a brief but memorable stage, film and television acting career, where I had the privilege of working alongside actors such as Johnny Depp, Nick Mancuso and Robert Conrad.  So this means that in my career life so far, I’ve been on the radio, on the covers of and inside of magazines and newspapers, prancing around on international runways, on bus billboards, on television, and even in the movies...and I still don’t feel like I’ve experienced my Andy Warhol 15 minutes?! Wassup with that?!

AS A VISUAL ARTIST

I received My BA degree in Studio Art and English Literature from the University of British Columbia in 2001.  I studied under several world renowned and well-recognized artists, to include: photographer Jeff Wall, mixed-media artist Ken Lum, sculptor Richard Prince and painter Robert Young.  My static work includes a variety of mediums: ceramic, metal, wood and textile sculpture;  acrylic and enamel painting;  and mixed media.  I consider myself a diverse expressionist and I am often inspired to add music, lyricism, prose, performance art and photography to further convey personal worldviews in my artistic efforts.  Many of my creations (eg: installations) include diverse images of women, and denote my own comments on our current perceptions of women in our culture today.  I am especially interested in addressing how women are presented in the media, and my work reflects my own personal experiences as an international fashion model, singer and actress - professions that feed the perfectionism and emphasis on the ‘external’, which North American women, including myself, so aptly fall prey to.  I have sold my work in British Columbian galleries and am looking to eventually expand the venues where my work is shown, as well as my role as an artist within my own community. My most recently completed project is a series of original abstract enamel painted mirrors I’ve entitled “Bliss”.t