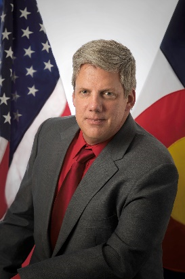 As a combat veteran - Representative Hanks served in the military throughout the world and across the United States.  He purchased land in Colorado in 2007 with the intent to retire and explore the Mountain West from the center of it all.  Out-of-control government forced him back in to public service.

He retired from the U.S. Air Force at the end of 2017 after more than 32 years of active and reserve service, serving as an enlisted man and as a commissioned officer.  He worked as a linguist in Desert Storm and during multiple operations, including Northern Watch, Southern Watch, and Earnest Will.  During the Global War on Terror, Ron served as an intelligence officer, performing duties in Iraq, Kuwait, and United Arab Emirates.

Representative Hanks served in several other capacities during his career, to include as a treaty escort for foreign inspectors from Russia and other countries, as a counterdrug officer in Kazakhstan working to stop the flow of drugs out of Afghanistan that funded the Taliban and Al Qaeda, and as a badged, credentialed counterintelligence agent.

When not deployed or in uniform, he worked in the oilfields of North Dakota, witnessing first-hand the benefits of American energy  independence, the merits of hydraulic fracturing, and the spirit and know-how of blue-collar America.

Ron Hanks (Republican Party) is a member of the Colorado House of Representatives, representing District 60. He assumed office on January 13, 2021. His current term ends on January 11, 2023.

Hanks (Republican Party) is running for election to the U.S. Senate to represent Colorado. He declared candidacy for the Republican primary scheduled on June 28, 2022.

Ron Hanks served in the U.S. Air Force. Hanks' career experience includes working as a linguist, a counterdrug officer, and a counterintelligence agent.