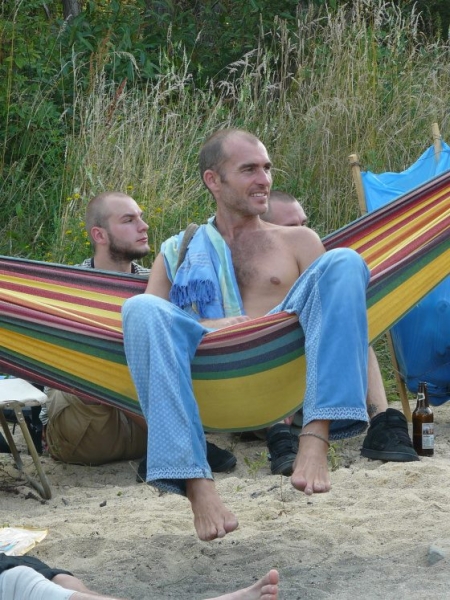 Yan Golding is a passionate cultural creative, yoga teacher, permaculture teacher, community builder, dancer and explorer of consciousness. Before the age of 18 he lived in five different countries and has continued traveling extensively so he never knows how to respond when people ask “Where are you from?”.

After graduating from a Quaker high school in the US he went to study aerospace engineering in The Netherlands. After 6 months he felt thoroughly saturated with the education system and became a ski-instructor. At 24 he embarked on a life-changing, 2 ½-year overland journey from Amsterdam to Australia, where he came in contact with meditation, yoga, wwoofing and rainbow gatherings. Since then he has participated sparingly in financial and cultural norms, retaining a natural curiosity (and sometimes bewilderment) for many of our social habits.

In 2002 Yan returned to South Africa with his partner, who he met in Auroville, India, to help create a community on 700 Ha of beautiful land. There he remained continuously for nine years, becoming the leading co-founder of Khula Dhamma Ecovillage. During that time he trained as a permaculture & ecovillage designer, massage therapist, vision quest facilitator, natural builder, yoga facilitator and taught himself a wide variety of skills related to sustainable and community living- including basic midwifery as he delivered his two beautiful daughters into this world.

In 2010, while attending an ecovillage design course, Yan was struck with a vision of an intentional unification and conscious collaboration among all people and groups who are dreaming and working for a brighter future. Since then he has devoted most of his creativity and energy towards raising awareness among the many branches of social change about our collective potential to work together to catalyse a fundamental cultural and systemic shift.

Currently Yan is serving as a lead focaliser for United Earth – an emerging global platform for unity and collaboration.

He now lives in South Portugal where he intends to co-create another ecovillage. Locally, he is part of the steering group for Transition Town Lagos and is exploring new paradigms and practices around gardening in conscious co-creation with Nature Intelligences.