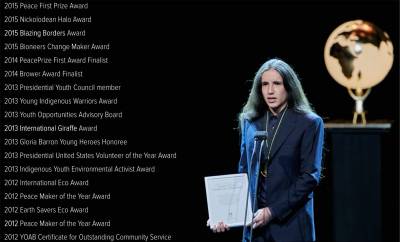 Earth Guardians Youth Director Xiuhtezcatl Martinez is a 17-year-old indigenous climate activist, hip-hop artist, and powerful voice on the front lines of a global youth-led environmental movement. At the early age of six Xiuhtezcatl began speaking around the world, from the Rio+20 United Nations Summit in Rio de Janeiro, to addressing the General Assembly at the United Nations in New York city. He has worked locally to get pesticides out of parks, coal ash contained, and moratoriums on fracking in his state and is currently a lead plaintiff in a youth-led lawsuit against the federal government for their failure to protect the atmosphere for future generations. Xiuhtezcatl has traveled across the nation and to many parts of the world educating his generation about the state of the planet they are inheriting. His message has inspired youth to join the front lines to combat the environmental and climate crisis that is impacting their future, as well as form Earth Guardian crews in over 30 countries.  His work has been featured on PBS, Showtime, National Geographic, Rolling Stones, Upworthy, Aljazeera, The Guardian, Vogue, Bill Maher, Skavlan, WE Day, AJ+, CNN, MSNBC, HBO, VICE, and many more. In 2013, Xiuhtezcatl received the 2013 United States Community Service Award from President Obama, and was the youngest of 24 national change-makers chosen to serve on the President's youth council.  He is the 2015 recipient of the Peace First Prize, recipient of the 2015 Nickelodeon Halo Award, 2016 Captain Planet Award and the 2016 Children's Climate Prize from Sweden.  Bill Mckibben of 350.org calls Xiuhtezcatl "an impressive spokesman for a viewpoint the world needs to hear.” 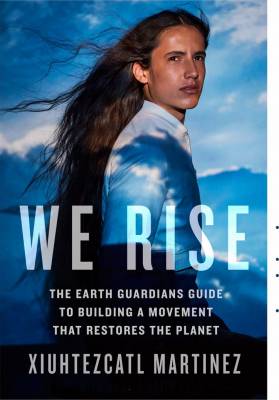