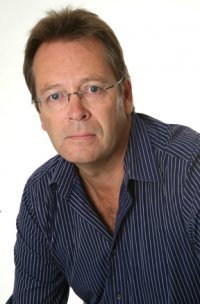 Robin, the most common ingredient missing from modern prescriptions is the very soul of the individual seeking help.

His second book “The Human Aerial” (Zenith Publishing 2006) explores dimensions beyond the detection of our five senses, and the impact these insights will have on our future healing. Along the way he unravels the mysteries of the chakras, telepathy, intuition, creativity and channeling. A revised edition, "The Human Antenna" was released in the US and Canada.

The Human Hologram followed The Human Antenna by winning Science Book of the Year at the 2011 USA Best Books Awards.

He is now a sought after guest on internet and syndicated radio shows in the US and worldwide, with interviews on unknowncountry.com's Dreamland, Revelations with William Henry, and Coast to Coast with George Noory. In 2008, Robin has also featured in the DVD  'Your Guide to True Happiness', and was filmed as an authority on cellular memory for the DVD special features of the Hollywood movie 'The Eye.' He was also featured on the 2010 New Zealand documentary 'Project 10.10.10 - Pill or Perception.'

Robin is also a passionate songwriter, singer and musician who has recorded four CDs of original songs 'Black Ice'' (1998) and 'Silk & Knives' (2002), 'Shimmer' (2006) and 'Something Magical' (late 2009). His songs have been played on National Radio, and 1ZB, with a further live performance on TV1's Good Morning Show. 'Shimmer' was nominated for 2010 Album of the Year by the US Indie Music Digest, and he was a runner up in the Nashville Song of the 2010 summer.

He has just finished writing a musical stage show “Chakramor” an audio-visual entertainment based on the growth of human consciousness, set to the rhythms of the 21st century.

He runs an integral health practice from his home in partnership with his wife Trish, a trained nurse and midwife. Trish and Robin have three children –Sophie, Lucy and Toby, and in November 2009, a beautiful granddaughter Pyper.