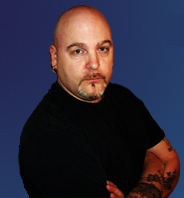 Robbie Thomas is a Best Selling Author with the book Paranormal Encounters. He has also three other books, published titles are...Signs From Heaven, To You From Spirit and A Link To Heaven...Chats With The Other Side. His success has seen two screenplays being written with a third in development for a trilogy titled, 'Paradox' in the Paranormal Horror genre.

Robbie is a contributing Author to three other titles one of which he worked with Award Winning Screenwriter, Gloria Shepherd. With Paranormal Encounters being a Best Seller there is more to come from Robbie, keep your eyes open for the new smash hit book 'Paradox The Gates Of Hell' coming soon!

Robbie has worked with many integral individuals within the paranormal community and starred in the critically acclaimed hit movies, The Sallie House and Dead Whisper. Robbie is also an outstanding professional motivational speaker as an expert in the metaphysical/spiritual/paranormal industry. He hosts the Can-Am Parafest Events in Sarnia, Ontario, Canada each year that sees a variety of celebrities speakers from television and film come to present on various topics in the Paranormal, Horror and Comedy genre's.