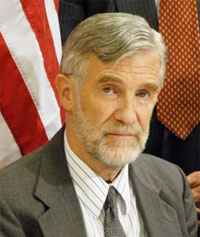 Ray McGovern leads the “Speaking Truth to Power” section of Tell the Word, a publishing arm of the ecumenical Church of the Saviour in inner-city Washington.  A former co-director of the Servant Leadership School (1998-2004), he has been teaching there for more than 20 years.  His current course is: “On the Morality of Whistleblowing”

Ray came from his native Bronx to Washington in the early Sixties as an Army infantry/intelligence officer and then served as a CIA analyst for 27 years, from the administration of John F. Kennedy to that of George H. W. Bush. Ray’s duties included chairing National Intelligence Estimates and preparing the President’s Daily Brief, which he briefed one-on-one to President Ronald Reagan’s five most senior national security advisers from 1981 to 1985.

In January 2003, Ray helped create Veteran Intelligence Professionals for Sanity (VIPS) to expose the way intelligence was being falsified to “justify” war on Iraq. On the afternoon of the day (Feb. 5, 2003) Secretary of State Colin Powell misled the UN Security Council on Iraq, VIPS sent a blunt memorandum to President George W. Bush, in which VIPS gave Powell a C-minus for content. VIPS ended the memo with this:

“No one has a corner on the truth; nor do we harbor illusions that our analysis is irrefutable or undeniable [as Powell had claimed his was]. But after watching Secretary Powell today, we are convinced that you would be well served if you widened the discussion beyond … the circle of those advisers clearly bent on a war for which we see no compelling reason and from which we believe the unintended consequences are likely to be catastrophic.”

On July 20, 2002, CIA Director George Tenet had told his British counterpart that the “intelligence and facts were being ‘fixed’ around the policy of ‘regime change’ in Iraq.”  On June 5, 2008, Senate Intelligence Committee Chair Jay Rockefeller, announced the main conclusion of a five-year study by his committee, saying, “In making the case for war, the administration repeatedly presented intelligence as fact when it was unsubstantiated, contradicted or even nonexistent.”  In sum, the “intelligence” was not mistaken; it was fraudulent.

As an act of conscience, on March 2, 2006 Ray returned the Intelligence Commendation Medallion given him at retirement for “especially meritorious service,” explaining, “I do not want to be associated, however remotely, with an agency engaged in torture.”  He returned the medallion to Rep. Peter Hoekstra (R, Michigan), then-Chairman of the House Intelligence Committee.

Hoekstra added to the Intelligence Authorization Act for FY’07 (HR5020) a provision enabling the government to strip intelligence veterans of their government pensions.  HR5020 passed the full House, but Congress opted instead for a continuing resolution.  Ray was thus spared from having to go back to driving part-time for Red Top Cab.

On December 11, 2014, Ray had an opportunity to tell Hoekstra exactly what he thought of Hoekstra’s Lone-Ranger attempt (he did not inform his House Intelligence Committee colleagues) to make it possible to revoke the government pensions of people like Ray.  He confronted the former Congressman off-air, after the two were interviewed live on CCTV’s “The Heat” about the Senate Intelligence Committee findings released on December 9, 2014 regarding CIA torture.  The interview itself offered Ray a unique chance to hold Hoekstra publicly accountable for condoning torture.  And the Michigan congressman rose to the occasion. (See minutes 8:15 to 10:41 of:
https://www.youtube.com/watch?v=xfCjS2B1ShY).

On the early afternoon of May 4, 2006, in Atlanta, Ray confronted Secretary of Defense Donald Rumsfeld on live TV with pointed questions like: “Why did you lie to get us into a war that was not necessary and that has caused these kinds of casualties?”

The impromptu, four-minute mini-debate that followed is still receiving hits on YouTube – https://www.youtube.com/watch?v=v1FTmuhynaw. Accused by TV pundits that evening of “following the Secretary of Defense all the way down to Atlanta,” Ray explained that he had gotten to Atlanta first – to receive, that same evening, the ACLU’s National Civil Liberties Award (won the previous year by Coretta Scott King).

Ray’s opinion pieces have appeared in many leading newspapers and other publications in the U.S. and abroad.

Ray still serves on the Steering Group of Veteran Intelligence Professionals for Sanity.

He has debated twice at the Oxford Forum, most recently in Jan. 2013, when he chose to take a lighter tone in trying to explain why it is still possible to dream the American dream.
https://www.youtube.com/watch?v=w79XPIlwdvY

Ray was in NYC with film-maker Robert Greenwald for the debut of his full-length documentary, Uncovered: The Whole Truth About the Iraq War. Ray is often on the road, giving talks and interviews to a wide variety of audiences in the U.S. and abroad.

His B.A. and M.A. degrees – both from Fordham University – are in Russian history, language, and literature, with minor concentrations in theology and philosophy.  He also holds a Certificate in Theological Studies from Georgetown University and is a graduate of Harvard Business School’s Advanced Management Program.

A Catholic, Ray has been worshipping for many years with the ecumenical Church of the Saviour.  He has been invited to lecture at various interfaith and ecumenical events around the U.S., and has preached during services at a number of Christian churches and Jewish synagogues.

Ray is particularly fond of the “substitute teaching” he has been invited to do at local universities and colleges.  At George Washington University, though, he quickly wore out his welcome when he stood silently with his back turned toward then-Secretary of State Hillary Clinton.  He was seized and badly beaten directly in front of Clinton while she spoke eloquently about the need for freedom of expression – in Iran. https://www.democracynow.org/2011/2/18/ex_cia_analyst_ray_mcgovern_beaten

Ray is fluent in Russian, German, and Spanish.  He and his wife have been married for 55 years; they have five children and nine grandchildren.