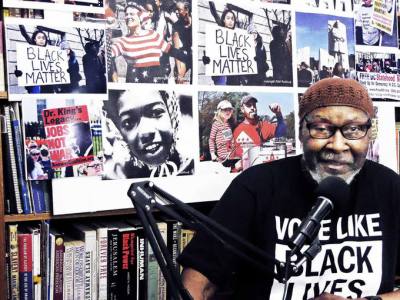 Phil Portlock retired from Metro, where for 29 years he was a photographer chronicling such things as the construction of the transit system.

Phil hadn’t had his first camera very long when he went to the  Washington National Cathedral to see the Rev. Martin Luther King Jr. deliver a sermon titled “Remaining Awake During a Great Revolution” on March 31, 1968.

After King's assassination, Phil saw parts of his hometown aflame and walked through DC taking pictures. And then got into his car and drove to the National Arboretum. Seeking peace — and seeding it — became part of Phil’s life.

He became active with the Poor People’s Campaign and a student of the civil rights movement and the legislation that resulted from it: the Civil Rights Act of 1964 and the Voting Rights Act of 1965.  Voting is the way citizens — Black and White, young and old, native-born and immigrant — make their voices heard.

In 2013 the Supreme Court considered the case of Shelby County v. Holder, which sought to strike down parts of the 1965 Voting Rights Act. For 29 days, Phil and his wife, Pat Sloan, held a vigil outside the court, urging the justices to leave the protections in place. On June 25, 2013, the court declared that Sections 4(b) and 5 of the act were unconstitutional, relaxing federal oversight of jurisdictions with a history of voter suppression. It would be harder to vote, but even more important, Phil and Pat decided.

Phil Portlock and his wife Pat Sloan put together a documentary on how Black Americans gained the vote after the Civil War, saw it threatened by Jim Crow laws and violent voter intimidation and protected by the 1965 act, only to see it threatened anew.

Phil delivered “Voting Rights: The Struggle to Be Counted” in libraries, churches and on campuses. When the coronavirus pandemic struck, he started offering his voter education seminar online. Phil and Pat spent every Sunday evening since early August 2020 remotely offering a whirlwind history of African American voting rights in the United States — and the recent threats to it.