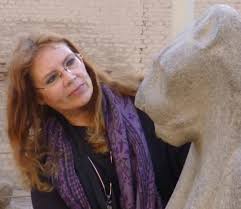 From a very young age, Patricia knew that she would one day be going home to Egypt. Having been born with a need to know, she has spent much of her life on a personal quest for knowledge, wisdom and spiritual fulfillment. Patricia's strong and vital connection to Nature and interest in the mystical and physical sciences propelled her into a lifelong study of the ancient mysteries.

As a long time student in metaphysical, spiritual and esoteric subjects and traditions, Patricia's eclectic spiritual background serves as a strong foundation to support to her work. She became of student of Khemitology after meeting world renowned, indigenous Wisdom Keeper, Abdel Hakim Awyan (1926-2008), on her first trip to Egypt in 2005. It was during her third journey to Egypt that she would meet, and fall in love with her husband, Yousef Awyan. Together, she and Yousef created The Khemit School of Ancient Mysticism as an open forum to share the teachings of his father, Hakim, and to continue on with the exploration and research of the ancient mysteries, both on and off the sites. They guide independent explorers that come to their doorstep from all over the world, and host their own tours several times each year.

Patricia’s focus has been on relating the secrets, symbolism and mysteries of the ancients to the shifting energies of our current reality. She lectures and has created online lessons that speak of our eternal cycling through golden and dark ages, and how the evidence left behind, by the very ancient Khemitians (Egyptians), portrays a civilization that far surpassed our own both technologically and spiritually. Much of what we think is REAL- is an illusion. However, the illusion serves to challenge and inspire us to grow and raise our own levels of awareness-- and to remember how to live resonantly with our natural world. Patricia illustrates how the ancients left us a blueprint that maps out the truth of the beauty, perfection and infinite possibilities that exist within and outside every one of us-- if we are willing to view our world from a higher perspective, as symbolized by the eye of Horus.

The Pantheon of Egyptian Neteru (gods and goddesses) actually symbolize aspects and/or forces of nature with multi-dimensional meanings and significance-- including being representative of the 360 senses that the indigenous say we all once had, in a higher dimensional Golden Age called the Age of Aten.

Patricia will discuss how we have been purposely given false interpretations of many of the ancient symbols and mythologies and how many of the original meanings were transformed and retold throughout different time periods, geographical areas and from differing cultural perspectives. Mythologists and symbologists often forget that the myths and symbols have been formed and transformed over thousands, if not, tens of thousands of years of history. And not only this --the secrets were hidden through layers of different interpretations directed toward different groups of people. The most powerful secrets were only entrusted to a select few.

Patricia relates to a heritage that has been passed down through the ages via an oral tradition of indigenous Egyptian (mostly female) wisdom keepers. They speak of a time in "pre-history --10,000 - 65,000 years ago or more when there was a highly advanced civilization living here during a great Golden Age on the planet. This was a matriarchal civilization that revered the strength and wisdom of the "mother"-- who they related to the creation energy of all that is. Everything is vibration; everything exists in waveform---the sin wave. It is the Neter, Hathor (primordial mother energy) that gives this sin wave the spark of "life" through Sound! This is why so many cultures revere the serpent energy which is the basis for all that exists in our three dimensional reality including our very own DNA.

The Egyptian Pantheon of Neteru were not created to be worshiped like the gods of our current "religions". They are multi-level aspects or forces of Nature---that combine to reflect the nature of our reality. Patricia will speak about these Neteru and what they represent --as well as the spiraling cycles -and cycles within cycles, of our existence. The indigenous here in Egypt concur with the wisdom keepers from around the globe: We have migrated through the end of a long Dark Age, and are experiencing the dawning of a new Golden Age that the indigenous here call the Age of Kheper, symbolized by the Winged Scarab.

When we trace the migration of symbols and legends back through the ages we make many fascinating discoveries. The truth of who we are and what we are capable of is beyond our scope of understanding---but the implications are mind boggling! We (not aliens), were the Gods and Goddesses that built and created the megalithic monuments and pyramid networks as energy devices. The abilities we deem to be supernatural or godlike, are perfectly natural gifts that we have all forgotten we once had and can have again!

The indigenous tell us that the ancient Khemitians called the Pyramids and other energy devices Per Neters, or houses of energy. They named their Temples- Per Bas or houses of spirit and created them both with a perfection of sacred geometrical form and mathematics, along with a combination of specific natural elements and on top of aqueducts and manmade waterways and ley lines that pulse intense energies from within the earth. Many of the monuments are perfectly laid out according to the four cardinal directionsand many reflect and interact with different solar and stellar events and maybe even the stars themselves.

It is no accident that people who come to Egypt often find that their entire lives change when they return home. The ancient concept of pilgrimage was not created to fulfill a religious obligation, but rather, as an opportunity to heal the body, mind and spirit, to re-awaken the senses and literally raise ones levels of awareness and consciousness.

What is evident to usis that we are affected by our experiencing of these still alive and powerful sites today. Patricia will speak about how the temples, symbols and the pantheon of Neteru are reflective of an external universe and a universe within our own physicality. Alchemy and Chemistry are words that are derived from the label for ancient Egypt Khemit which can refer to an alchemy of the physical and/or the etheric. As we walk up the consistently rising star gate path of many of the temples here, our consciousness and our levels of awareness are gradually elevated, as we approach the powerful Holy of Holies...representing our very own Pineal Gland, our own energetic portal to all that is. Patricia will address how we can enhance these spiritual and healing experiences through resonant sound and meditation, offering us the opportunity to transcend dimensions.