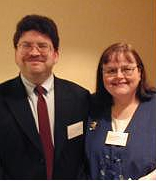 Nancy L. Zingrone has a Bachelor in Arts with Honors in psychology (Mundelein College), a Masters of Science in Education (Northern Illinois University) with a teaching speciality in college-level psychology, and was a doctoral candidate in history (Duke University) with specialities in the histories of science, medicine, psychiatry, and American social history. She completed a doctorate in psychology (University of Edinburgh) in 2006 with a thesis entitled "From Text to Self: The History of Criticism and Response in the English-language Literature of Academic and Scientific Parapsychology."

Zingrone was an Adjunct Faculty in Psychology at Northeastern Illinois University in Chicago, Illinois where she courses of elementary and nonparametric statistics and introductory and research parapsychology (1979-1982). She was a Research Fellow (1982-1985) and a Visiting Scholar (1986-1993) at the Institute for Parapsychology in Durham, North Carolina (now known as the Rhine Research Center), where she conducted experimental ESP research. She has been an organizer of, and lecturer at the Summer Study Program of the Institute of Parapsychology (1983-1993, 2000) where she lectured on elementary statistics, spontaneous case research, experimental methodology and women in parapsychology. She has served several terms on the Board of Directors of the Parapsychological Association since the early 1990s, during which times she was also the Editor of PA News. She was elected President of the Parapsychological Association for the 2000-2001 term. She is currently a candidate for President of the PA for the 2003-2004 term.