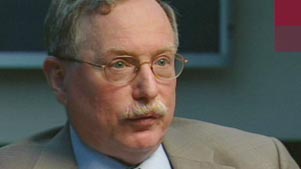 MARK KLEIN is the whistleblower who exposed AT&T’s participation in the National Security Agency’s illegal warrantless spying on millions of Americans.  Klein grew up in New York City and in 1962 entered Cornell University’s School of Engineering. As the 1960s exploded in social upheaval he was moved with his generation to investigate society and graduated in 1966 with a B.A. in history. Later he returned to technical school, obtaining certificates in electronics and computers which led to employment in computer manufacturing in the 1970s.  He was hired by AT&T in 1981 as a communications technician and worked for the company for over 22 years. In 2003, he discovered the illicit NSA installation in San Francisco and three years later brought it to public attention. He retired from AT&T in May 2004, and now lives in the San Francisco Bay Area with his wife.

ABOUT MARK KLEIN'S BOOK: Wiring Up The Big Brother Machine...And Fighting It

Whistleblower Mark Klein tells the story of the illegal government spying apparatus installed at an AT&T office by the National Security Agency, and his battle to bring it to light and protect Americans’ 4th Amendment rights. After the New York Times revealed in 2005 that the NSA was spying on Americans’ phone calls and e-mail without Constitutionally-required court warrants, the Bush administration openly defended this practice which also violated the Foreign Intelligence Surveillance Act. All details of the highly secret program remained hidden from the public—until Klein came forward. A technician for over 22 years at telecom giant AT&T, Klein was working in the Internet room in San Francisco in 2003 and discovered the NSA was vacuuming everyone’s communications into a secret room, and he had the documents to prove it. He went to the media in 2006, and then became a witness in a lawsuit brought against the company by the Electronic Frontier Foundation.