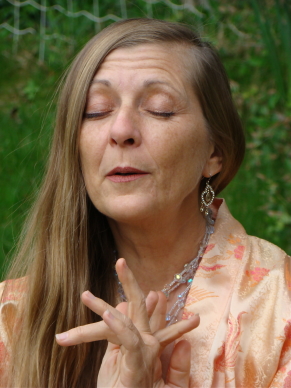 Laura Lee Lizak is an internationally known channel/transmitter for QuanYin and Creation. Laura had been used as QuanYin’s grounding instrument since 1992. QuanYin transmits energetically using Laura’s entire body; emanating whatever new accelerated energies and energy bodies are needing to ground into us and our reality at this time. QuanYin transmits in full embodiment of personality, voice, mudra, movement, frequency emanation, and creative expression, and is often seen in Laura’s body during transmissions. Many say “this is far more powerful than channeling.” QuanYin has ignited thousands upon thousands through Laura. Laura was personally trained as a channel by Seth, of Seth Speaks.

Laura is the director of the QuanYin Creation Center, dedicated to the enlightenment of all beings. QuanYin and the Forces of Creation guiding our planetary enlightenment design the work at the Center. Global enlightened support teleconferences with Quan Yin are offered regularly.