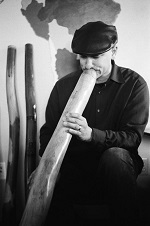 Joseph Carringer is a professional didgeridoo musician and sound therapist. In his sound therapy practice he uses concert class didgeridoos, combining Traditional Chinese Medicine meridian and organ theory with Ayurvedic Chakra philosophies creating a unique and powerful therapeutic sound healing experience. Joseph has been playing an Australian Aboriginal didgeridoo for over 15 years, using it as a deep meditative tool in his personal shamanic journey as well as a therapeutic instrument for his clients.

Joseph presents and performs both nationally and internationally on mind/body connection and the effects of didgeridoo sound therapy for the purposes of clearing energetic and emotional stagnation within the energetic body to wellness and healthy life style seekers, as well as to medical and holistic professionals.
After doing extensive research, Joseph opened his harmonic therapy practice to the New England Seacoast communities in January of 2004. Since the fall of 2005, Joseph has offered yearly classes for the Maine Medical CAM programs and the University of Southern Maine’s CAM programs, and presents at the University of New Hampshire and New England College. Joseph also volunteered at Maine Medical Center, Portland, ME on R-1 (cardiac) and Pediatric floor.
Joseph has been on the internationally known author and psychic medium, John Holland’s Hayhouse Radio show several times as well as opened musically for many of John’s events. He was also a guest speaker at John’s Chakra-Healing class at Kripalu Center for Yoga presenting his Didgeridoo Chakra Clearing Workshop.
Joseph began performing musically with the didgeridoo in 1997 with blues and jazz acts and later moved on to playing live breath percussion to electronic dance music with DJs. Currently he is performing and producing music with Josh Harris (major label remix producer and former music director/keyboardist for Seal) in a club/world fusion electronica group called Table Syndicate.
It is Joseph’s goal to help people realign their bodies’ natural rhythms on a cellular level through harmonic therapy. He believes that through this work, people can achieve a greater sense of natural health and open doors for a higher sense of creativity and consciousness. He feels a deep natural connection with the healing of our planet and ourselves and has a variety of CD’s for sale.
Joseph also spent nearly a decade in the hemp-based apparel industry as both a manufacturer and activist. 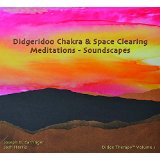