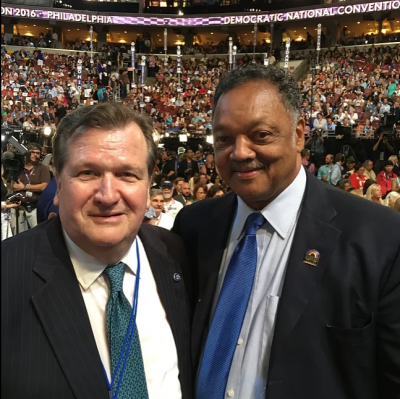 The Reverend Jesse L. Jackson, Sr., founder and president of the Rainbow PUSH Coalition, is one of America’s foremost civil rights, religious and political figures. Over the past 40 years, he has played a pivotal role in virtually every movement for empowerment, peace, civil rights, gender equality and economic and social justice.

In 1991, Rev. Jesse Jackson was elected United States Senator for Washington, DC, advocating for statehood for the nation’s capital and advancing the “rainbow” agenda at the national and international levels. Since then, he has continued to promote voter registration and lead get out-the-vote campaigns, believing that everyone should be encouraged to be a responsible, informed and active voter. He has spearheaded major organizing tours through Appalachia, Mississippi, California and Georgia.

Rev. Jackson has been called the “Conscience of the Nation” and “the Great Unifier” challenging America to be inclusive and to establish just and humane priorities for the benefit of all. He is known for bringing people together on common ground across lines of race, culture, class, gender and belief.

For his work in human and civil rights and nonviolent social change, Rev. Jackson has received more than 40 honorary doctorate degrees and frequently lectures at major colleges and universities including Howard, Yale, Princeton, Morehouse, Harvard, Columbia, Stanford and Hampton.