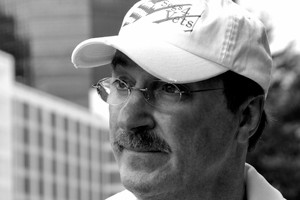 Mr. Jerry Kerr is the founder of an organization called “Disability Rights Advocates For Technology,” or “DRAFT,” an all-volunteer organization certified as one of America’s best charities representing people with disabilities.   On July 25, 1998, Jerry Kerr's life was suddenly transformed from a physically active CEO of a national home-building and real estate development corporation, avid outdoorsman and pilot; to that of a spastic quadriplegic. He was involved in a diving accident shattering his C-4 vertebrae. The prognosis was that he would never again move from the neck down. Determined to maximize his potential for recovery, Mr. Kerr embarked upon a rigorous physical therapy schedule six days a week. Although neurologically impaired from the neck down, he regained the ability to stand briefly. In early 2003, he began using a Segway as his primary means of mobility.  For those who may not be familiar, a Segway is a two-wheel, self-balancing, electric mode of transportation.   In September 2005, Jerry Kerr and his organization, Disability Rights Advocates for Technology (DRAFT), started the Segs4Vets program, awarding Segways to men and women of the United States Military who had sustained severe injuries while serving our nation in Operation Iraqi Freedom and Operation Enduring Freedom, injuries which resulted in permanent disability and difficulty walking.   In the years since, Segs4Vets has received widespread recognition, including the 2010 Spirit of Hope Award by the Office of the Secretary of Defense for outstanding service.  In December 2008 Jerry Kerr was personally awarded the Secretary of the Army’s Public Service Award for distinguished public service in providing outstanding support to our Nation’s veterans. In 2016, The Congressional Medal of Honor Society presented Mr. Kerr with the Distinguished Citizen Award.