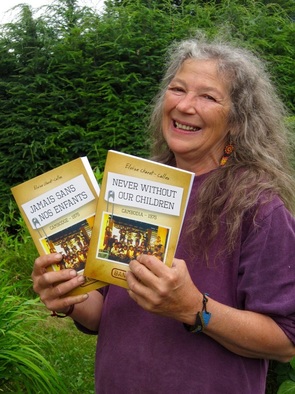 Eloise Charet-Calles, Bear Clan of Turtle-Island, was born May 20, 1951, in Trois-Rivieres, Quebec and grew up primarily in Montreal and on the family farm in Montebello, Quebec, the third eldest of ten children.

Eloise's up-bringing led her to seek a life of humanitarian service working in Mexico with local street children and in Morocco teaching the children of nomadic shepherds.

In 1974, Eloise and her sister Anna opened and directed "Canada House"- an orphanage in war torn Phnom-Penh, Cambodia. Their work succeeded in enabling the successful airlift and placement of 80 Cambodian and Vietnamese. children to waiting families in Canada and the U.S. “We refused to leave without our babies and drew world attention to our cause. We stood by our motherly instincts and survived incredible tragedies to save the seed of a generation that was wiped out in Cambodia.”

From 1976-78, Eloise continued her work as a volunteer with several orphanages in Dacca, Bangladesh eventually returning to British Columbia, Canada.“I had a gardening/landscaping business in Vancouver, B.C. until my marriage broke up; then I had a huge garage sale and departed for Kathmandu.”

In 1986 Eloise and her children left Canada for Nepal, where she helped coordinate the production of the book Erosion and Sedimentation in the Nepal Himalaya, for which Dr. Galay won the "Canadian Engineer of the Year" award in 1988. During her time in Nepal, Eloise established a local restaurant, organized a soup kitchen and undertook home care for several handicapped orphans from Mother Theresa's Sister of Charity Foundation.

Returning to Canada in 1988, she lived at the family farm in Quebec and continued her interest in herbal medicine, health, nutrition and the raising of her five children. In 1990, she moved her family back to British Columbia and finally settled in the Kootenays.

Eloise helped to organize a cooperative store for cedar basket weavers in the small village of New Denver, located on Slocan Lake in the West Kootenays. On July 22, 1997 she hung up her apron and stood on the Old Sandon Road in New Denver, where she was arrested and chose to spend the next 55 days fasting in the maximum security Detention Centre for Women in Burnaby, B.C. rather than sign the undertaking assuring her compliance. “I was presented with a petition signed by every woman in jail in support of their sister Eloise and her cause for water. It was one of the most touching moments of my life. Throughout the court process I realized that corporations had more rights to water than the people.”

Eloise began the Cross-Canada WaterWalk on May 8, 1998 at Mile 0 of the Trans-Canada Highway in Victoria, British Columbia. In early June 1998, she took a break from walking to receive the Vancouver Island Human Rights Coalition medal, presented by the Governor General of British Columbia and walked into Ottawa with her fellow waterwalkers on October 2nd, 1998.

“I discovered how tainted our water was and witnessed the suffering of many communities. In Winnipeg, the heart of Turtle-Island, I crossed paths with Bear Grandfather, who was sent by the Bear Grandmothers from the East to walk from Montreal to Vancouver for water. We both followed the red road, the path of legends. We both were cleansed in many sweats across the nation, and the water blessing ceremonies became more intense. Two Bear Grandmothers stood at the entrance to Ottawa with big braids of sweet grass to honour the WaterWalk pilgrimage. She is Bear Clan and as mothers, grandmothers they are very protective of the next generation and all generations to come.

Beginning in November 1999, Eloise stood outside for three cold months in front of the Nelson court house with her trans-Canada water samples, attempting to draw attention to our Canadian water crisis during the federal election campaign which was then taking place. She assisted with the creation of many local markets enabling small businesses to sell their products.

In 2003, she was arrested at the Smallwood Creek blockade in Winlaw. She made an appeal from her Bear Clan status to preserve our watersheds and pressed for community eco-logging, part of her evidence being her water samples.

From the year 2000 on, Eloise has taught cedar and other fibre collecting and weaving, claiming that we can get as much money in baskets from a tree as can be gotten in boards. She has worked alongside loggers throughout the Kootenays when gathering cedar bark, in the hopes of encouraging cable logging and more trans-formative industry in our area. She also travels to schools, first nations meetings and conferences to speak for water, demonstrating her water samples and talking about her experiences. Along with a small group of people, she stopped the herbicide spraying in our clearcuts, prevented a power project from destroying three drainage up the Duncan, stood with the Sinixte people on Perry Ridge. She was also candidate for Mayor in Victoria.

In the fall of 2005, Eloise held a roadblock in the Incomapleux with Henry Hutter for two weeks until the police arrived for arrest. Both Eloise and Henry stepped aside and let workers through, but maintained their position as an information camp. The very next day, a rock cliff slid onto a bridge and blocked the road, forcing all loggers to evacuate the valley. The Incomapleux was preserved another year. Pope and Talbot, the company involved, is suing Eloise and Henry.

In 2012, Eloise wrote a book on Cambodia called ‘Never without our children’ which has been translated into French and she was flown to Cambodia to be in a documentary aired on television.

In the following years, she has been teaching aboriginal studies in many schools, from basket weaving to food and medicine as well as trying to save the toads at Summit Lake. She has volunteered for many community events and remains as always devoted to small local business and caring for the environment.

“It’s hard to imagine that in these modern civilized times, we, the little people, are being branded as criminals and almost terrorist by the State. Good governance is equal to the quality of water given to all our children and that means pure, natural, clean water, not tainted and bleached as we are witnessing today. To pervert water and convince everybody that it is healthy is morally wrong. To legally permit any industry to destroy watersheds and to allow corporations to pollute the environment is a sin. Profit and business must never rule over life. Managing nature is the arrogance of all time. Our indigenous roots teach us that we are a small piece of this immense web of life and we must learn to respect all life as we should respect one another and Leave a Living Legacy for future generations.” 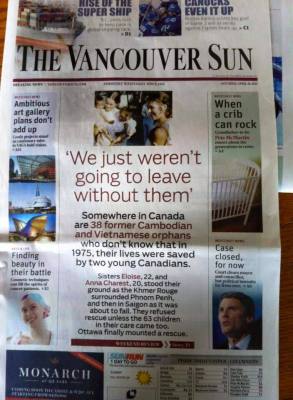