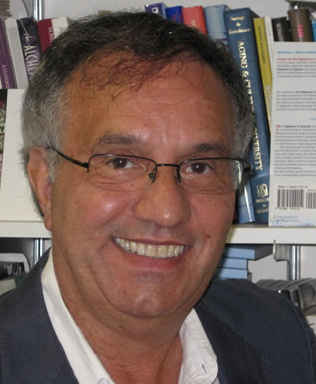 Donaldo Macedo is a professor of English and a Distinguished Professor of Liberal Arts and Education at the University of Massachusetts Boston. A critical theorist, linguist, and expert on literacy and education studies, Macedo is the founder and former chair of the Applied Linguistics Master of Arts Program at the University of Massachusetts Boston.

In 2014, he was elected to the National Academy of Sciences in the Republic of Cape Verde. In 2015, he was also inducted into the Academy of Letters in the Republic of Cape Verde. In 2003, Macedo was named a member of the Laureate Chapter of Kappa Delta Pi—International Society in Education, one of the world’s most prestigious awards in education. Past recipients of this award include Albert Einstein (1950), Walter Lippman (1960), Margaret Mead (1962), Charles E. Skinner (1966), and Jean Piaget (1974). The award recognizes Macedo’s scholarly contributions over the years and the influence his work has had both in the United States and abroad.

I have received numerous accolades over the years, but my proudest accomplishment is the more than 30 million dollars I have secured in grants ( this includes grants I wrote for various school districts that serve large numbers of linguistic minority students), which have enabled me to award an average of 75 scholarships annually since 1981. These scholarships support students who would not be able to pursue their university studies without such assistance. My reward has been the gratitude of these students, many of whom are immigrants and who say that their lives were transformed by Macedo’s efforts, as they are now university professors, authors, doctors, lawyers, educators, and policymakers in the United States and abroad.

Macedo has been a central figure in the field of critical pedagogy for more than 30 years. His work with Paulo Freire broke new theoretical ground, as it helped to develop a critical understanding of the ways in which language, power, and culture contribute to the positioning and formation of human experience and learning. Macedo was Freire’s chief translator and English language interpreter. His published dialogues with Paulo Freire are considered classic works not only for their elucidation of Freire’s theories of literacy but also for adding a more critical and theoretically advanced dimension to the study of literacy and critical pedagogy. Macedo’s and Freire’s coauthored book, Literacy: Reading the World and the Word, is central to critical literacy in that it redefines the very nature and terrain of literacy and critical pedagogy.

In addition to his seminal work with Freire, Macedo has played a central role in constructing a literacy of power for use in critical pedagogy. Contrary to popular belief and the dominant ideology, schools do not always serve the best interests of their students. Both the schools and the cultural pedagogies of the media and other social institutions often perpetuate ignorance or, as Macedo puts it, stupidification. As schools and other institutions fragment knowledge and deny contextual understanding, students find it increasingly difficult to make connections between school information, their lived worlds, and relations of power and privilege. Macedo’s work directly challenges the educational experts who attempt to keep issues of power and social struggle outside the purview of education. Macedo argues that questions of power vis-à-vis socioeconomic class relations, gender dynamics, and racial discrimination are suppressed by many mainstream political and educational leaders. Their position, Macedo asserts, conveniently ignores questions of ethics. As long as such questions are suppressed and a literacy of power isignored, schools will remain tools of the status quo.

Macedo ties this literacy of power directly to what he describes as emancipatory literacy, which is characterized by students becoming knowledgeable about their own histories, experiences, and the culture of their everyday environments. They also learn to discern the dominant culture’s codes and signifiers in order to deal with them in their own environments. In an educational context shaped by emancipatory literacy, therefore, teachers must teach a dual curriculum. Macedo argues that a language of possibility permeates a two-tier curriculum, which both empowers students to make sense of their everyday life and gives them the tools that are valued in the dominant culture, which they need to achieve upward mobility. Macedo writes that students in this context celebrate who they are while learning to deal with ways of seeing and being that are not their own. In this way, students from marginalized backgrounds can create their own histories (see below, Freire & Macedo, 1987; Macedo, 1994; Macedo& Bartolomé, 2001). For more information on Macedo’s work in this area, go to www.freireproject.org/content/donaldo-macedo.

Donaldo Macedo has published more than one hundred articles, books, and book chapters in the areas of linguistics, critical literacy, and multicultural education. His publications include Literacy: Reading the Word and the World (with Paulo Freire, 1987), Literacies of Power: What Americans Are Not Allowed to Know (1994), Dancing with Bigotry (with Lilia Bartolomé, 1999), Critical Education in the New Information Age (with Paulo Freire, Henry Giroux, and Paul Willis, 1999), Chomsky on Miseducation (with Noam Chomsky, 2000), Howard Zinn on Democratic Education (with Howard Zinn, 2005), and Imposed Democracy: Dialogues with Noam Chomsky and Paulo Freire (2012). 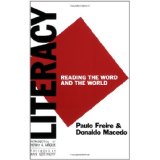