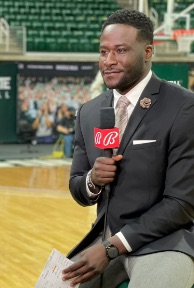 Devin Gardner was a 2010 Watkins  Award Honoree from Detroit Michigan.  He is a former high school national top 10 ranked quarterback who eventually started at the University of Michigan. Devin was an undrafted free agent of the New England Patriots. He ultimately played professionally in Japan for a few years. Devin is now a Sports Broadcaster, a youth sports advocate, a podcaster, and is considered one of the greatest University of Michigan Sports Broadcasters'.