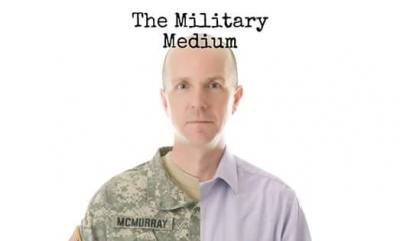 Dean McMurray—“The Military Medium”— is an internationally acclaimed psychic, medium, healer, dowser and ordained minister. His story, so powerful and so authentic, is unlike any other psychic medium out there, and it’s why people from all across the globe are drawn to him for readings and personal guidance. So what’s his story… why is he the psychic so many trust?

Spending most of his childhood in northern Minnesota, Dean developed a deep love for nature and his country. That love of country inspired him to enlist and serve 24 years in the United States armed forces. Dean’s service brought him overseas on several occasions, the last of which awakened his psychic abilities and set him on a new path in life… a new mission with new marching orders.
After returning from his last overseas tour, Dean’s deceased grandmother paid him a visit. She had a message for him: you are a medium, Dean, and it’s time to get to work. There were no words. No sound. But the message was as clear as any he’d ever heard. It came straight from his grandmother’s immortal heart to his own.

With this new directive, Dean retired from the Army and enlisted in a new service—he devoted his life to developing these newfound psychic abilities in service to others. Today, Dean conducts readings for clients throughout the world, teaches mediumship classes, presents at regional symposiums, conferences and workshops, and he is currently working on his first book.
Described as “spooky accurate,” Dean has helped hundreds of clients connect with their loved ones and receive messages of hope, love, peace, healing and inspiration.