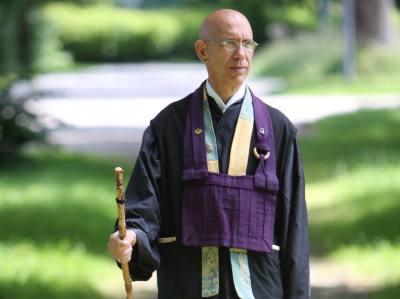 Claude AnShin Thomas was born in the United States in 1947. His childhood began his exposure to violence and abuse. At the age of 18 he volunteered to serve as a combat soldier in the Vietnam War. Today he states that he carries the responsibility for much death and destruction.

After his return to the US, he experienced years of unemployment, social isolation, violence, and addiction. He began to walk a Buddhist path in 1990 leading to his full ordination as a Zen Buddhist Monk into the Japanese Soto Zen Tradition in August of 1995.

Claude AnShin realizes that the roots of war are not particular within one group but within each and every member of society. He also realizes that the acceptance of our own vulnerability, aggression, fear, and individual suffering is the starting point for healing and transformation, for peace. “When war ends here within us, then war ends. If everyone ends the war within oneself, then there are no seeds any longer from which war can grow.” (excerpt from ‘AT HELL’S GATE- A Soldier’s Journey from War to Peace“, Shambhala 2004)

Today Claude AnShin speaks publicly, leads retreats and meetings. He also visits religious and secular communities all over the world addressing this very important topic: The cultures of violence and how they can become transformed.