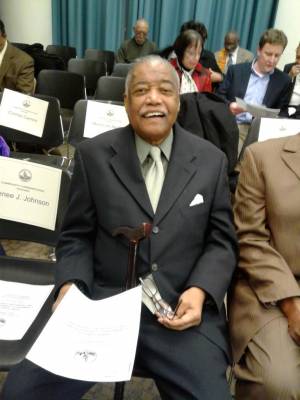 Hicks is also a member of the DC Commission on Aging and the newly appointed DC Commission on African American Affairs.  He also serves on the Commission on Black Men and Boys under the purview of the Honorable Eleanor Holmes Norton. He is also a devout member and trustee at Greater New Hope Baptist Church in Ward 1. Hick co-hosts with Joni Eisenberg the “Heal DC” radio broadcast on WPFW 89.3 FM. His service to the community also included work as the coordinator of labor for the District of Columbia for the Million Man March in 1995. Hicks was also a member of the 50th Anniversary of the March on Washington Committee. He is the president of the Robert “Bob” Hicks Foundation which advocates for human and civil rights.

Hicks is also a proud member of the NAACP.  He is also well known for providing 35 years of service to the DCPublic Library’s Black Studies Center. Hicks is a supporter and advocate of the African American Civil War Memorial &Museum. He is also founder of Bread-for-the-Soul Toy & Book Party – an HIV and AIDS organization which provides toys and books for Christmas to children whose parents have HIV/AIDS and to children who are diagnosed with HIV.

He is the former president of the AFSME District Council 20 and is a current member of the retirement chapter.Hicks continues his work as a member of the DC Democratic State Committee and is a dedicated member of two organizations that advocate for statehood for the District of Columbia – Stand Up! for Democracy in DC (Free DC) and DC for Democracy. Hicks is a member of the Waterside Tenants Association where he advocates for tenants’ rights and information transparency.  He is widely recognized for his support for the arts and community programming. Hicks is also an active member of several study groups.