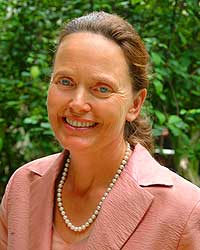 Anna grew up in a Swedish family that consumed a traditional diet of meat and carbohydrates. But at the age of 15, her entire family became vegetarian and Anna’s interest in the intersection of health and nutrition began.

Similar to Brian’s experience with his mentor Ann Wigmore, a Danish woman by the name of Alma Nissen changed Anna’s course. In 1974, Alma was so incapacitated by arthritis that she was practically bedridden. Her hands and fingers were stiff and in constant pain, and she could not bend, walk or even turn over by herself in bed. Unwilling to accept her lot as a bedridden invalid, she changed her diet and normal routine. She began drinking fresh vegetable juices and herbal teas and taking heat treatments and hydrobaths – all with the goal of cleansing her intestine. She began to feel better and, after just a few months, was completely cured. Wanting to share what she had learned, she transformed her seven-room apartment in Copenhagen into an arthritis clinic that attracted patients on stretchers, on crutches and in wheelchairs. After four to eight weeks on Nissen’s simple regime, these patients left the clinic on their own two feet. Word spread, and a wealthy Swedish benefactor offered the Brandal estate in Stockholm for her use as a rheumatic clinic. With a doctorate in nutrition from Denmark University, Anna became Director of the Brandal Clinic in her twenties, while also working towards her nursing degree.

In 1978, Ann Wigmore and Brian Clement were invited to speak at a conference in Sweden, where Brian and Anna first met. For Brian, it was love at first sight. Two years later, Anna came to Boston to experience the Hippocrates program for herself. A year following, she asked Brian if she could come work at Hippocrates and the rest is history.

To Hippocrates, Anna brought a refreshing European approach to healing, and her maternal ways rounded out the edges of Brian’s straightforward approach. She speaks seven languages, and travels the world with Brian to lecture on the topics of natural health methods in family and pediatric care.