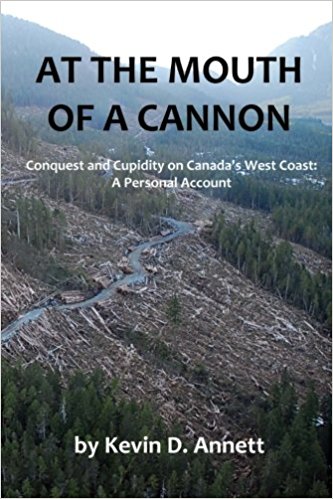 Now available! An exclusive book on Land Theft and Genocide in Canada
Summary

AT THE MOUTH OF A CANNON depicts the last-stand resistance by the Ahousaht indigenous nation in Canada to a three-headed assault by the British Crown, its churches, and land-hungry companies. The author is a renegade clergyman from the United Church of Canada that led the assault on the Ahousahts. He befriended and fought alongside Chief Earl Maquinna George to stop the sale and logging of the last of the Ahousaht ancestral land. This is a moving story of Group Crime and resistance, of who really owns Canada and how natives and whites alike are expected to dance to the tune of multinational corporations.

To order this book see www.createspace.com/7997500 or Amazon

Kevin is an award winning film maker, lecturer, broadcaster and author, as well as a Nobel Peace Prize Nominee (2014, 2015) and recipient of the Prague Peace Award (2016). He is a human rights consultant and Co-founder of the International Tribunal of Crimes of Church and State (ITCCS).

Since 1995 Kevin has led the campaign to expose and prosecute crimes of genocide by church and state in Canada and around the world. A former clergyman in the United Church of Canada, Kevin was expelled from that church without cause or due process after giving voice to aboriginal victims of crimes by that church and the Catholics and Anglicans in their murderous Indian residential schools. His thirteen books and documentary film “Unrepentant” chronicle those crimes and the historic campaign to expose and undo them.

Since 2010 Kevin has worked with the Brussels-based International Tribunal of Crimes of Church and State to prosecute child trafficking and genocidal crimes in Europe and North America. He was instrumental in forcing the resignation of Pope Benedict in February 2013 after helping convene an international common law court of justice that convicted Benedict (Joseph Ratzinger), Queen Elizabeth and Canada's top officials of church and state for crimes against humanity.

As adviser to the Provisional Council of the Republic of Kanata, Kevin helped establish its founding Proclamation and Constitution that supplanted “Crown” authority in Canada in January of 2015. Kevin presently hosts the global public affairs program Here We Stand (Sundays at 6 pm eastern, 11 pm GMT at https://bbsradio.com/herewestand). He also serves as an elder to the Covenant of Free Congregational Christians (The Covenanters).

Kevin is an inspiring public lecturer and community consultant who works throughout Europe and North America. His websites and contact information follow.