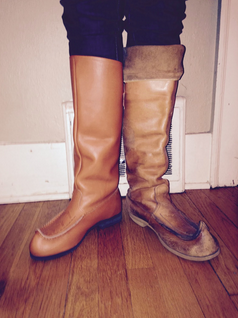 Ten days ago I was in Stockholm, for the first time since 1978. My main focus was to take my Mom's ashes to the house my family lived in back then. I didn't really have any other agenda. It was the last part of a sixteen day trip, four countries, four languages, three currencies.

Ten days ago I was in Stockholm, for the first time since 1978.  My main
focus was to take my Mom's ashes to the house my family lived in back then.
I didn't really have any other agenda.  It was the last part of a
sixteen day trip, four countries, four languages, three currencies.

In the back of my head, though, I thought about Laplander boots.

Back in the late 70's, everyone here wore wooden clogs and these leather boots
with curled toes.  The wooden soles would wear down with use, I remember
seeing teenagers shuffle through snowy streets, their heels practically dragging
on the ground.  I bought myself a pair of the boots, but not the women's
style which had a smaller curl to the toe.  I purchased men's boots, which
fit me just fine (I have big feet).

When I came back to Sweden, I wondered about the women's boots.  It wasn't
really a fully formed desire.  I hadn't bought anything on this trip, I'm
not really a shopper.  We mainly ate out and went to places where I'd lived.

We were only in town 72 hours, from Tuesday afternoon to Thursday afternoon.
On Wednesday we "dusted" my mother in Danderyd, and then rode the Tunnelbana
back to Gamla Stan for lunch and walk back to the hotel before dinner.

I remember thinking that if I actually saw the boots in a store, I should seriously
consider buying them.  It would be my only chance, as I don't have any
plans to return to Sweden.  But we'd already done a considerable amount
of walking around Stockholm and hadn't seen any boots of this style in any of
the store windows.

On the way back to the hotel, I decided to walk around an open air market.
As we were leaving, the last stall we passed had a pair of women's Laplander
boots hanging up over it's table of other (non shoe things).  It was the
only pair the vender had. And it was in my size.

He explained that back in the 1970's and 80's they'd been all the rage, but
now they were out of style in Stockholm (but in the north of Sweden they still
wear them).  He said he hadn't sold any for a very long time, which is
why these were on sale - for half off.

So. I got the boots. And wore them home on the plane.

The thing that struck me about this experience was how I made these boots happen.
I didn't use any of my energy techniques.  It was a very quiet and
internal process, while a lot of other things were going on.

It was a dialogue with my inner Self.  "I wonder about women's Laplander
boots".  "If I see them, how much would I be willing to pay?" (I'll spend
money on food and experiences, but can be kind of miserly on material things).
And, "if I don't see them, that's ok".

As I'm recalling this, I can see that my focus was both in my head, and in
my solar plexus.  Communication between my clear seeing and my area of
Will (as in will power).  And I wasn't attached to the outcome.  If
I didn't see them, that's ok. My manifestation had a time limit as well, since
I was getting on a plane to Seattle the next day.

All of this ties into a greater growth experience going of for me around Consciousness,
having a clearer connection between the little me and the greater I AM.  But
that's for a future blog post.

I invite you to play with this yourself.  What is something you'd like
to create? Have a conversation with your inner Being about it.  Ask open
ended questions, be unattached to the outcome.  Try this for the next seven
days (and let that be your time limit for it to manifest) and see what happens!