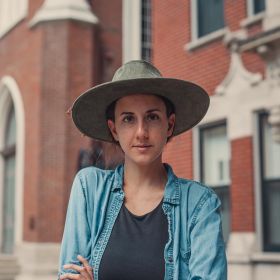 In a thought-provoking and deeply authentic trek to truth, Becky Tahel (content creator with over 40 million views across social & actress, Mixology, and Jdate’s Matzo Ball Commercial) wrestles with religion, love, and identity after her sister’s interfaith marriage. Becky journeys to carve out her identity as an Israeli immigrant in Los Angeles by consulting a handful of Rabbis (including LA’s own Rabbi Wolpe and Rabbi Susan Goldberg), religious experts (including Reza Aslan), mentors (including the former boss, Eric Andre), and her family around her initial question, "should I marry Jewish?" What she finds changes her initial question to "why be Jewish?" & shifts the very course of her life. ‘American Birthright’ isn't a solely Jewish story — Becky gives an authentic voice to those struggling to fit in, find their purpose and identity, and own their individuality in a world that begs assimilation.

'American Birthright' is a significant film that follows an honest and complex search for truth and religious identity. - Judy Gruen, Aish

By including so many diverse voices and celebrating the decisions by both sisters, the documentary refrains from dogmatically pushing a single message about Jewish faith and intermarriage. Rather, audiences see the sisters’ unique personal journeys and are given questions to help them reflect on their own lives. - Sophie Panzer, The Jewish Exponent

For a woman who was making her first documentary film, this effort is amazing. I had a wonderful time watching this film, self-examining my own life as it related to hers.  And thinking of others in my life who live on both sides of this idea/question of interfaith marriages and, at its core, faith as you as a person see and experience it. - John Strange, Selig Film News

It is so easy to deflect our own personal truths just so we don't have to face those questions in the mirror. ‘American Birthright’ isn't just a film about Jewish discovery. It's about the personal discovery that anyone, from any religion, can relate to. A must-see. - Mark Sugiyama, Eclectic Arts Media

As a writer & producer, Becky has worked with some of the most influential content creators — from Jake Paul and Eric Andre, to Jay Shetty and Gabby Bernstein. She has produced content for countless brands worldwide, generating over 30 million views across social media. Her award-winning documentary, American Birthright, has garnered international acclaim, and she was invited to speak at the Israeli President's Residence about her creative work. She currently speaks globally about the power of content creation & continues to copywrite, ghost-write, produce, and create for brands, influencers, and organizations worldwide.