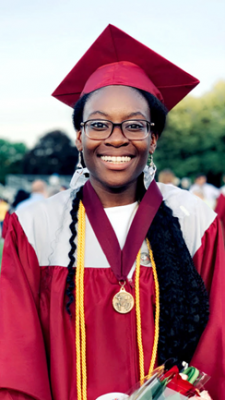 Verda Tetteh is a Massachusetts high school student who made an unexpected announcement during her graduation ceremony last week when she asked that a $40,000 scholarship awarded to her be given to a student attending community college instead. Verda is 17 and plans to study biochemistry at Harvard College in the fall. During the impromptu speech, Tetteh told the crowd that she was inspired by her mother, who had attended community college.Rosemary Annan, Tetteh's mother, had immigrated from Ghana, before having Tetteh in the United Kingdom. She currently works two jobs, including an overnight shift at a group home.