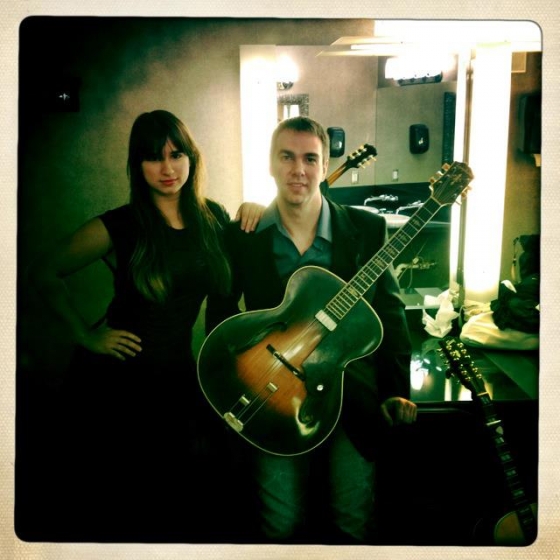 Fellow Jazz musician and activist Gilad Atzmon who visited, interviewed and actually played music with Trevor LaBonte, tells the story of our guest better than anyone.  Here is his article...

The War Against Trevor (LaBonte) by Gilad Atzmon

Until two years ago, Trevor LaBonte was one of the most successful Jazz artists in Texas. He had been performing every night and in the most prestigious venues. He was the first-call guitar player for many of Austin’s prominent musicians. But then it all changed.

Gilad Atzmon: Trevor you were a local Jazz hero, what happened?

Trevor LaBonte: An activist named Craig Berlin, owner of  Pro-Tape Staff in Austin, organized a campaign  to destroy my career by terrorizing the entire Austin music community. He creates Facebook posts in which he tags 50 or 60 important people in town, and reports to them that I am a ‘Nazi,’ an ‘Anti-Semite,’ and a ‘holocaust denier.’ Berlin demands that everyone must do everything in their power to make sure I never play another note in public. At first, most people ignored him, but  then others took up his cause, including the radio DJ Andy Langer from KGSR, helping to make sure I have become a hate figure and completely ostracized.

Let me understand correctly, you didn’t publish a book or even an article, all that vile campaign against you was launched because you expressed some thoughts on your own Facebook page? Is it correct?

How have your friends reacted to this onslaught?

--They are confused and afraid, mostly. Many of them quietly agree with at least some of what I say, and they are still friends with me.  But understandably, they are scared to be listed in a performance announcement with me, since they would be certain to draw the hissing and screeching and boycott of Craig Berlin's fans. Most of my friends are sad and just want to play music together.  Anyone who tries to stick up for me, or just moderate the witch hunt against me,  risks being similarly attacked themselves. And the attacks are vile.

Musicians are not used to being vilified for unusual opinions I guess that it would be correct to argue that the entire Jazz community is strictly speaking terrorized by this Jewish campaign to ostracize you.

-- Many of the musicians in Austin are  Jewish and are among my friends. The campaign against me  is being orchestrated by about 10 Jewish people who have publicly agreed amongst themselves that I have fallen ‘gravely mentally ill’, must be taken immediately to a ‘psychiatric institution’ and be ‘heavily dosed with meds.’

-- One  recommend that I be castrated by chainsaw.

This is clearly more radical treatment than the traditional rabbinical circumcision apparatus..

--There were many other violent threats and fantasies, which are an interesting and revealing
response to my mission statement: I advocate universal human rights and opposition to supremacism, violence and corruption of all forms, Jewish, Christian or otherwise. I also believe in the free exchange of ideas and free speech.

I have now met your beautiful and kind girlfriend and your lovely parents. I saw a lot of fear, it seems that everyone around you is subject to harassment by Berlin and his defamation troopers, I even learned from venue owners that they were harassed by Berlin and his klan. Have you ever spoke to Craig? Did you meet him?

--We have only communicated briefly on Facebook. He keeps me blocked now, so I can't even see what he is saying about me, let alone defend myself. I have no choice except to just let him go crazy for the world to see. I hope this demonic ranting  helps people to understand the rampant madness raging in such obsessed minds.

I obviously looked at the accusations against you and they are indeed vile, You are quoted questioning on FB  "If Hitler was an evil dictator, then why did he have broad public support? Why did Germany love him so much?

This is obviously a legitimate and valid question. However when I visited your FB page I realized that you push it a bit further, you question the Holocaust official narrative. You ask “what about those ‘gas chambers?’ Where are they? Why were they never found?”  Trevor, do you realise that such questions are banned by in European countries? Why do you think there is an attempt to stop Holocaust revisionism? Why are you chased, what are they afraid of?

--Yes, I realize Holocaust revisionism is banned in 17 countries. But America is not one of them. Americans need to use their right to free speech to question traditional history of all kinds. The Holocaust is no different in that respect.

You have also suggested that Jews were highly involved with Bolshevism.  Truth can be offensive, but why is this the case?

-- In this case, the truth is offensive to Jews because, were it to become widely known, their whole narrative of history would have to change. The fact  is that Bolshevism was largely a Jewish supported cause.

I am not a supporter of Bolshevism nor am I a Marxist, but I would simply argue that Jews used their dominance within the Bolshevik movement in order to promote their ethnic interests. I would agree that Jewish Bolsheviks carried on an element of Judeo centric supremacist righteousness.

-- I asked if Jews ran some of the camps of Gulag Archipelago because they harbored deep racial animosity toward the Russian people. I often like to phrase things as questions, and my intent is to get a historical and intellectual conversation started. Yes, they are pointed questions, and my goal is to lead to the conclusions  I have reached. More importantly, I want  people to question traditional versions of history. It's a very painful process, for me as well as
for others, I am sure. I was shocked and upset to learn that 85% of the Bolshevik/Communist government were actually Jewish, something I did not know because it is not taught in any history class.

How can Hitler be seen as the greatest mass-murderer of all time, when practically next
door, people like Trotsy/Leiba Bronstein, Lazar Kaganovich, and Gengrich Yagoda were running completely amok?.The title of worst mass murderer has many competitors.

What is the solution?

-- I think the best solution would be to discard our "political correctness" standards. We should be able to question any historical or political narrative.  That's the first amendment and I think it was created to allow difficult discussions exactly like these.  This is the only way we can start to approach the "truth" in history. No group, including Jewish people, should be allowed to control history.  In the south, we have not controlled the history of the Civil War and I also think that's a good thing.

Thanks for your time Trevor. I would urge my readers and followers to contact Craig Berlin and to demand that he stop his hate campaign against you at once.  I am pretty sure that the tide will change soon. I had an incredible time staying with you and playing music together. However, for the first time I met a musician who was more outspoken than myself. In fact, never before have I had trouble because of the views of one of my band members. This was pretty funny and a very positive dvelopment indeed.