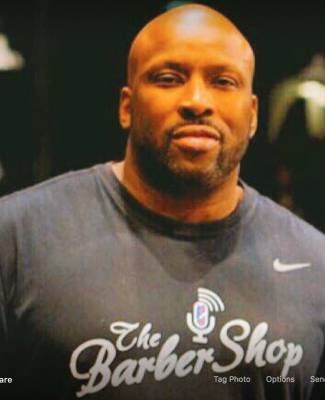 Terry Hollimon also known as T-Holla, grew up with in an athletic family. Both him and his brothers played college football and his dad played professional football. Having a passion for acting and entertaining, his peers remembered him as a thespian in high school. With football being his number one passion, acting and entertaining would be considered his 1-A. His family fully supports the Barbershop Movement for what it represents and because they know how much entertaining and football means to him. His family considers it a blessing that Terry gets to enjoy doing what he loves for a living.

It was tough at first in the beginning to have people understand their vision and to see what they were talking about. They wanted to create a platform where they can talk about sports in a fashion where it is understandable to the average person. The average soccer mom can understand a football game better by listening to the Barbershop then they can from someone who has been talking football for the last 15 to 20 years. That was their biggest hurdle.

Fun Facts: He got to meet Marcus Trufant through his younger brother who played football with Marcus in college. Terry is a HUGE family man!