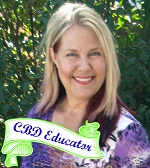 CBD/THC discussion and availability through my second guest, Robin Ashley who grew up in Colorado where  she learned to both love and respect nature and our planet, her deep love for animals eventually guided her to living a vegan lifestyle.

Robin has been passionate about natural health since 2003, when her beloved cocker spaniel, Jessie, became extremely ill and the vet informed her that ‘nothing could be done’. Not believing this was true, she began desperately researching then trying natural cures, and within just 30 days, Jessie was back to full health. As remarkable as this was, it was not the reason Robin became passionate about natural health. It was actually the response from the vet that opened her eyes to what Western medicine was all about.

When Robin took Jessie back to the vet for a check up, she was anxious to share with him what she had done that resulted in a total reversal of Jessie’s condition. The vet admitted himself that he could not believe this was the same dog and asked Robin what she had done. Excitedly, she gave him all the details! When she was finished he said that he was very happy for her and Jessie, but that he could not share this information with anyone else. When she asked why, the vet replied, because it’s not medicine.

Robin left the vet’s office that day angry and confused, she didn’t understand why he felt that organic foods and herbs were not medicine, especially since it was the father of medicine, Hippocrates who said, “Let food be thy medicine and medicine be thy food.”

Since that day, Robin has spent thousands of hours researching natural health, every time she come across a new product or modality she would learn everything she could about its benefits. She is grateful to have come across several things that have improved her own health as well as the health of the people and animals she loves. However, nothing has had a bigger impact on her health and overall life, than CBD Hemp Oil!

Because of her personal life changing experience with CBD, she is on a mission to share this information and the CBD products that helped her with the world. She has been doing this only since September of 2016, but has already witnessed several others having dramatic and positive improvements in their health. Robin believes very strongly that she would not be here today had it not been for her very good friends sharing CBD with her.

Knowing that there are countless others who have been told by well meaning doctors that ‘nothing can be done’ to help them with their current health challenges, Robin has made it her life’s mission and full time career to be a CBD Educator. She says, “We have all been told things that quite simply are not true, and people have suffered needlessly for years because of it. I am eager to share the truth with anyone who is open minded enough to listen.”

Robin is happy to speak to large groups, do a one on one call, or anything in between. Every time someone shares their success story with her, she becomes even more determined to spread the word. More information is available at: https://www.linkedin.com/in/damon-ashley-b3b2b2b0/

NB: I searched for additional websites with prices and products and spent several hours reading about Kannaway, the company they work for. Things are not always as they seem so do you own research. I never did find specific products and prices other than that they are expensive according to reviews.