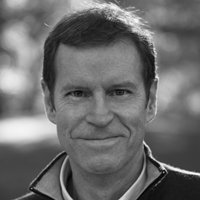 Born in 1956, and raised on the outskirts of San Diego, California, Robert Kopecky survived a traumatic childhood, traveled extensively as a young man, and lived a variety of lives as a ski bum, a martial artist, a factory welder, a monumental sculpture fabricator, an underground cartoonist; and finally as an award-winning illustrator, art director, and animation designer. His journeys – from the Mayan underground, to remote South Pacific islands, to the capitals of Europe, to the deserts of Arizona and the canyons of New York City – were punctuated by three dramatic, distinctly different "Near Death Experiences."

Eventually, the years of professional successes and personal setbacks delivered him to his own “dark night of the soul.” This led to ten years of study, meditation, and service, and the eventual transpersonal realization of what life (and death) can be that inspired him to start joyfully passing along the lessons he’d learned in a very hard way.

He and his wife divide their time between the Upper Delaware Valley in Pennsylvania, and Brooklyn, New York. He continues his art, designing animation for agencies, TV and internet; and writing spiritual essays and memoir for his blog, “Art, Faith, and the Koko Lion,” RobertKopecky.blogspot.com.

Robert is an Emmy-nominated art director. He designed the credits for Showtime’s Weeds  and designed and art directed the PBS children’s show Word World. He’s contributed to Evolver, Beliefnet, Gaiam TV, TheMindfulWord, and elsewhere. He lives in Brooklyn with his wife, Sue Pike, the Animal Talker (SuePikeEnergy.com).