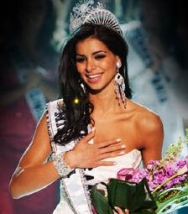 Rima Fakih was born September 22, 1985 in South, Lebanon. Fakih’s parents, Hussein and Nadia, immigrated the family to New York City in 1993 when Rima was seven years old escaping Lebanon’s civil war. One of five kids, Rima grew up most of her life in Jackson Heights, Queens where she attended elementary public school P.S. 69 and Intermediate School I.S. 145. She graduated from St. John's Preparatory School, a Catholic high school in Astoria, Queens. After graduating high school, Fakih’s family moved to Dearborn, Michigan where she earned her Bachelor of Arts degree in Economics, with a minor in Business Administration at the University of Michigan. Active in campus life, Fakih served her fellow students as president of Students in Free Enterprise (SIFE) and President of University of Michigan-Dearborn, Business School.

On May 16,2010 Rima Fakih made history as the first Arab, Lebanese, and Muslim to be crowned Miss USA representing the state of Michigan. Proudly Ms. Fakih represented her title as she faced many controversies because of her ethnicity and religion with the media nationally and internationally. Armed with a quote that her father raised her to believe, “You don’t know who you are until you know where you came from”.

Rima Fakih has been honored numerous times including, The Ethnic Foundation of Understanding, American Task Force of Lebanon, Arab Anti-Discrimination Committee, Renee Mowad Foundation, the president of Lebanon, Michel Suleima, the Beirut International Award Festival, and received the key to the city of Connecticut. Upon winning Miss USA she returned to Dearborn, Michigan where she was given the key to the city. Approximately 150 people -- including politicians and community leaders – attended the event.

Fakih also spent time volunteering for various community organizations such as Ameri-Corp, ACCESS (Arab-American Community Center), American-Arab Anti-Discrimination Committee, and sat on the board of AAPN (Arab American Professional Network.) Fakih is dedicated to helping remove the stereotype of Arabs in America and all over the world and removing the fear that many Arabs possess in America. As Miss Michigan USA 2010, she served as one of the first official pageant ambassadors for women’s self- defense awareness, educating women on the importance of taking the necessary precautionary measures to best protect and prepare themselves from unwanted situations.

Rima Fakih wants to continue to break barriers and make history. She passed down the crown of Miss USA in June of 2011 and has been active in taking part in Hollywood films and reality TV shows as well as taking more initiatives to support her platform and her dream.