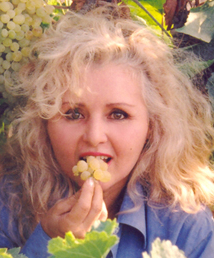 Rhio is a singer, actress and author, as well as an investigative reporter in the area of health. Rhio is of Hungarian-Cuban descent, raised in the U.S., but completely fluent in Spanish. As a performer she has appeared on over 50 TV shows. Currently she is completing a musical CD with raw food and environmental themes, which will be released Summer 2006.

CNN and American Journal aired stories on the raw food lifestyle featuring Rhio. She is considered very knowledgeable in the area of raw and living foods. In 1997 she started "Rhio's Raw Energy Hotline" on one of her phone lines in New York City where she lives. The hotline, which is updated once each month, provides information for people who are interested in the raw/live food lifestyle, including upcoming events in the New York area as well as worldwide. The hotline also provides commentary on some of the most pressing health issues of our time, such as genetic engineering of seeds, food irradiation, electro-magnetic pollution, etc.