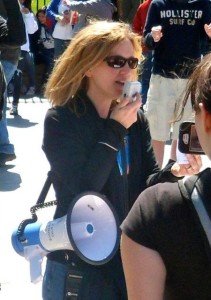 Peggy Robertson has taught kindergarten, first, second, fourth, fifth and sixth grade, beginning her career in Missouri and continuing in Kansas, for a total of ten years.

She was hired by Richard C. Owen Publishers in 2001 to serve as a Learning Network Coordinator and spent the next three years training teacher leaders and administrators in educational theory and practice in the state of Colorado, as well as around the country during the summer months.

In 2004 she was hired as the Literacy Coordinator by the Adams 50 School District in Westminster, Colorado. While working in Adams 50 she mentored teachers and administrators and supported them in the writing and implementation of school development plans.

She earned her master’s degree in English as a Second Language at Southeast Missouri State University. She currently is an instructional coach at an elementary school and devotes the rest of her time to her work at United Opt Out National. Contact Peggy at writepeg@juno.com or 720-810-5593.