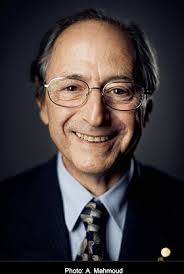 Michael Levitt, Ph.D, is an American-British-Israeli biophysicist and a professor of structural biology at Stanford University, a position he has held since 1987. His research is in computational biology and he is a member of the National Academy of Sciences. Levitt received the 2013 Nobel Prize in Chemistry, together with Martin Karplus and Arieh Warshel, for "the development of multiscale models for complex chemical systems". Michael Levitt was born in Pretoria, South Africa, to a Jewish family from Plungė, Lithuania; his father was Lithuanian and his mother was of Czech descent. He attended Sunnyside Primary School and then Pretoria Boys High School between 1960 and 1962. The family moved to England when he was 15. Levitt spent 1963 studying applied mathematics at the University of Pretoria. He attended King's College London, graduating with a Bachelor of Science degree in Physics in 1967. In 1967, he visited Israel for the first time. Together with his Israeli wife, Rina, a multimedia artist, he left to study at Cambridge, where his three children were born. In 1979, he returned to Israel and conducted research at the Weizmann Institute of Science in Rehovot, becoming an Israeli citizen in 1980. He served in the Israeli Defense Forces for six weeks in 1985. In 1986, he began teaching at Stanford, and since then has split his time between Israel and California. Levitt holds American, British and Israeli citizenship (he is the 6th Israeli to win the Nobel Prize in Chemistry in under a decade). Levitt spends time every year in Israel, where his wife and children live.