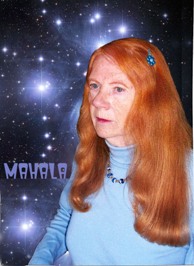 Studying the science of Astrology since the early 1980′s has allowed her to become an expert in Mundane Astrology (study of world events).   Over the years, her tracking of the planets in connection with their relationship to earthquakes, floods, storms, volcanic eruptions and other natural phenomenons as well as man made phenomenons (such as war) enhances her abilities as an expert Mundane Astrologer.

Mahala Gayle has also extensively studied the Book of Revelation in the Bible.   From that study she has been able to correlate the Bible and its relationship with the stars.   She has appeared on many local (Puget Sound Area) TV programs discussing this topic in depth. After watching the predicted events transpire one after another, she came to the conclusion that there is a master plan in action and a path to understanding that master plan is through Astrology.

Evidence that Astrology is a path to understanding this plan, is best demonstrated by the history of Jesus.   The science of Astrology was held in high esteem during the time of Jesus, as the wise men (Magi) who visited Jesus shortly after his birth, were known to be Astrologers.