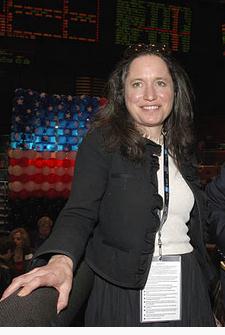 Libby began her producing career working on the award-winning PBS series Inside Story, the first ever regularly scheduled examination of press performance to appear on television.  Eventually, she went on to inherit the company when its founder, Ned Schnurman, passed away.

Her producing credits include numerous specials for PBS, network and cable television.  They include, The Jews of Moscow with Hedrick Smith, Star Wars: The Bottom Line and a series of special reports on campaign finance reform for The Nightly Business Report.  The company teamed with Djali Rancher productions to produce Bling: A Planet Rock, airing on VH1 and collaborated on the 2006 film, Stadium Story: The Battle for New York’s Last Frontier.

Bob Costas, America’s premier sport’s journalist, said of her special Hardball: Baseball From the Inside Out, “it was fascinating in the way it captured not just the dynamics of baseball’s cut-throat competition, but the spirit and shared experience of the men who play the game.  Only someone who knew and appreciated both the game and the craft of television could have put it together.”  David Bianculli of The New York Daily News said her program Baseball Hall of Fame Scrapbook: The Seat of Power, “comes very close to achieving what, this year, seems impossible: It almost makes you feel good about baseball again.”

Ms. Handros also produced the highly controversial and critically acclaimed documentary, Trump: What’s the Deal?.  Other producing credits include The Hunt for the Pearl Harbor Files which was broadcast as part of the 50th anniversary commemorations of Pearl Harbor, Round-Up the Usual Suspects hosted by Pia Lindstrom on the making of the movie classic Casablanca, and Mid-Life Baby a special for Discovery Health.

Recent features include The American Ruling Class, a first-of-its kind dramatic-documentary musical exploring our country's most taboo topic: class, power, and privilege in our dominally democratic republic, and Cape Spin: An American Power Struggle, a delightful exploration of the proposed wind farms off the Nantucket Sound.  She has also produced numerous award-winning commercials, industrials, and even the occasional political biography.

ABOUT Trump: What’s the Deal? - A film by Libby Handros

In 1988, business mogul Leonard Stern commissioned a television documentary to be made about Donald Trump, but the film was never aired because Trump managed to prevent its circulation.

“He did everything he could to suppress this documentary,” producer Libby Handros said. “And back in the day when we made the film, there were only a handful of networks. You had a few independent entities, but everything was controlled by big corporations, the three networks. And Donald was threatening lawsuits and stuff and they just didn’t need to take that on, even if the lawsuit would have no merit in the end.”

The documentary, Trump: What’s the Deal? is now available to be streamed online.

“Now that Trump is running for president, it is time for the American people to meet the real Donald and learn how he does business. The old Trump and the new Trump? They're the same Trump,” notes the film’s website.

Trump: What’s the Deal? chronicles the real-estate developer and presidential hopeful’s rise to power. His self-described “addiction” to acquiring cash and real estate drove him to build developments in Manhattan, Atlantic City, Palm Beach, and Los Angeles. He skirted the law on multiple occasions throughout his career, underpaying his workers, associating with mob bosses, committing union fraud, harassing tenants, and ignoring environmental regulations, yet managed to evade legal retribution.

Often Trump’s developments were unprofitable, but he kept acquiring new properties anyway, continuing his construction projects with a Sarah Winchester-like delusion. His perpetual publicity stunts and position as the "poster child for 1980s greed” kept his image as “the people’s billionaire” afloat for a while, but he eventually began facing criticism for his antics from the media. The film delves into his tumultuous personal affairs, stubborn business behavior and descent into bankruptcy, ending with the introduction of his Monopoly-esque board game, Trump: The Game, which parodies his attitude toward life with the motto: “It’s not whether you win or lose, but whether you win!” 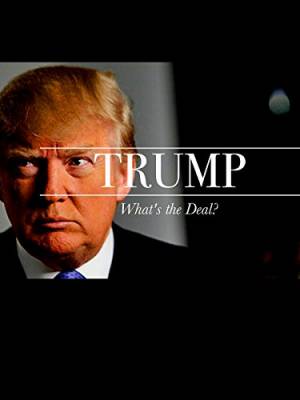